Global sea surface temperatures were the highest on record, at about 0.45°C above the 1961-1990 average.

Sea surface temperatures in the eastern tropical Pacific approached El Niño thresholds. They were also unusually high in the western tropical Pacific Ocean, across the north and north-east Pacific as well as the polar and subtropical North Atlantic, southwest Pacific, parts of the South Atlantic, and in much of the Indian Ocean. Temperatures were particularly high in the Northern Hemisphere from June to October for reasons which are subject to intense scientific investigation.

Ocean heat content for January to June was estimated down to depths of 700m and 2000m and both were the highest recorded.

Around 93% of the excess energy trapped in the atmosphere by greenhouse gases from fossil fuels and other human activities ends up in the oceans. Therefore, the heat content of the oceans is key to understanding the climate system.

As the oceans warm, their volume increases through thermal expansion. Water from the melting of ice sheets and glaciers also contributes to sea level rise. Local variations in sea level are affected by currents, tides, storms and large-scale climate patterns like El Niño. In early 2014, global-average measured sea level reached a record high for the time of year.

Arctic sea ice extent reached its annual minimum extent of 5.02 million km2 on 17 September and was the sixth lowest on record, according to the National Snow and Ice Data Center (NSIDC).

Antarctica daily sea ice reached a maximum daily extent of 20.11 million km2 on 22 September, setting a new record for the third consecutive year. The changes in the atmospheric circulation observed in the past three decades, which resulted in changes in the prevailing winds around Antarctica, are considered by scientists as factors related to this increase. However, it is possible that this increase is due to a combination of factors that also include effects of changing ocean circulation. 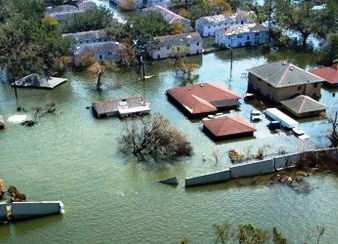 Twelve major Atlantic storms affected the United Kingdom through the winter 2013-14 and the UK winter was the wettest on record, with 177% of the long-term average precipitation. In May, devastating floods in Serbia, Bosnia-Herzegovina and Croatia affected more than two million people. In Russia, in late May and early June, more than twice the monthly average precipitation fell in Altai, Khakassia and Tuva republics in southern Siberia. In September, southern parts of the Balkan Peninsula received over 250% of the monthly average rainfall and, in parts of Turkey, over 500% of normal. July and August were very wet in France with the two-month total being the highest on record (records begin 1959). Between 16 and 20 September, parts of southern France recorded more than 400mm of rainfall – three to four times the normal monthly average. Heavy rain in central and southern Morocco in November caused severe flooding. At Guelmim, 126mm of rain fell in four days, the monthly average for November is 17mm and the average for the year is 120mm.

The monthly precipitation over the Pacific side of western Japan for August 2014 was 301% of normal, which was the highest since area-averaged statistics began in 1946. In August and September, heavy rains caused severe flooding in northern Bangladesh, northern Pakistan and India, affecting millions of people.

Buenos Aires and northeastern provinces of Argentina were severely affected by flooding. In February, many stations in northern and central Argentina reported record rainfall totals for the month. In May and June, precipitation totals in excess of 250% of the long term average were recorded in Paraguay, southern Bolivia and parts of south east Brazil. The heavy rain led to flooding on the Parana River which particularly affected Paraguay, where more than 200,000 people were affected.

On 29 and 30 April, torrential rain fell across the Southeast, Mid-Atlantic and Northeast of United States causing significant flash flooding. At one location in Florida, the two-day precipitation total was a record 519.9 mm.

Precipitation in the southern part of Northeast China and parts of the Yellow River basin and Huaihe River basin did not reach half of the summer average, causing severe drought.

Parts of Central America suffered rainfall deficits in the summer. Parts of eastern and some areas of central Brazil are in a state of severe drought with severe water deficits extending back more than two years. São Paulo city has been particularly affected with a severe shortage of stored water.