As of mid-November 2014, large areas of the western U.S. remained in drought with areas of California, Nevada and Texas having received less than 40% of the 1961-1990 average. Canada experienced dry conditions at the start of 2014 with many regions only receiving 50-70% of the baseline average in the west and north between January and April.

At the start of the year, northeast New South Wales and southeast Queensland in Australia had long-term rainfall deficiencies. 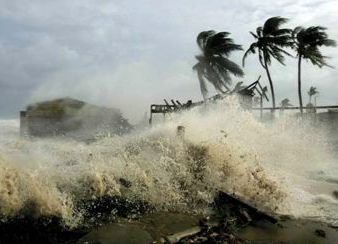 In the North Atlantic basin, there were only eight named storms. The Eastern North Pacific basin saw above average hurricane activity, with 20 named storms.

In the Western North Pacific basin, twenty named tropical cyclones formed between 18 January and 20 November, slightly below the 1981-2010 average of twenty-four storms (to the end of November). Ten of the cyclones reached typhoon intensity. Typhoons Nakri and Halong, contributed to the high precipitation totals recorded in western Japan in August. Typhoon Rammasun displaced more than half a million people in the Philippines and China in July.

The latest analysis of observations by the WMO Global Atmosphere Watch Programme shows that atmospheric levels of carbon dioxide (CO2), methane (CH4), and nitrous oxide (N2O) reached new highs in 2013. Data for 2014 have not yet been processed.

Globally-averaged atmospheric levels of CO2 reached 396.0 parts per million (ppm), approximately 142% of the pre-industrial average. The increase from 2012 to 2013 was 2.9 ppm which is the largest year to year increase, with a number of stations in the Northern hemisphere recording levels above 400 ppm. The overall increase in atmospheric CO2 from 2003 to 2013 corresponds to around 45% of the CO2 emitted by human activities. The remaining 55% is absorbed by the oceans and the terrestrial biosphere.

NOAA’s Annual Greenhouse Gas Index shows that from 1990 to 2013, radiative forcing by long-lived greenhouse gases increased by 34%. CO2 alone accounted for 80% of the increase.

The WMO global temperature analysis is principally based on three complementary datasets maintained by the Hadley Centre of the UK’s Met Office and the Climatic Research Unit, University of East Anglia, United Kingdom (combined); the U.S. National Oceanic and Atmospheric Administration (NOAA) National Climatic Data Centre; and the Goddard Institute of Space Studies (GISS) operated by the National Aeronautics and Space Administration (NASA). Global average temperatures are also estimated using reanalysis systems, which use a weather forecasting system to combine many sources of data to provide a more complete picture of global temperatures. WMO uses data from the reanalysis produced by the European Centre for Medium-Range Weather Forecasts.

The Provisional Statement is being released at the 20th Conference of the Parties (COP20) to the United Nations Framework Convention on Climate Change (UNFCCC), taking place in Lima, Peru. Final updates and figures for 2014 will be published in March 2015.