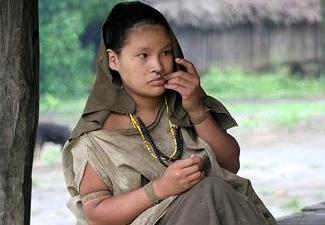 Peru’s Vice-Ministry of Inter-Culturality (VMI) has issued a critical report temporarily blocking the expansion of Peru’s biggest gas project and claiming that two ‘isolated’ indigenous peoples living in the region could be made extinct if it goes ahead.

The VMI’s report is a detailed consideration of the Environmental Impact Assessment (EIA) of the planned expansion of the Camisea Gas Project in Peru’s south-east Amazon, which was written by the operating company, Pluspetrol, together with UK consultancy Environmental Resources Management (ERM), and is currently pending approval by Peru’s Ministry of Energy (MEM).

According to the VMI, the health, ‘traditional economic activities’ and ways of life of the indigenous peoples in ‘initial contact’ and ‘voluntary isolation’ (‘isolated peoples’) in the region will be severely impacted and two of them, the Nanti and the Kirineri, could be made ‘extinct’. The political significance of the project was underlined when only a few hours after being uploaded onto the website of the VMI, the report was withdrawn. In the days that followed, senior government figures responsible for the report, including the Vice-Minister of Inter-Culturality, Paulo Vilca Arpasi, resigned.

Almost three-quarters of Pluspetrol’s concession, called ‘Lot 88’, overlaps with a supposedly ‘intangible’ reserve for ‘isolated peoples’. Although Pluspetrol has produced gas from Lot 88 since 2004, it now intends to build a pipeline extension and, in a bid to find further gas deposits, drill 18 exploratory wells and conduct 2D and 3D seismic tests affecting over 300 square km of rainforest within the Reserve.

According to the VMI’s report, these operations will involve, among other things, more than 1,000 workers in the reserve, helicopter flights, noisy machinery, the detonation of explosives, and clearing considerable areas of the rainforest for the seismic lines, camps and helicopter ‘drop-zones’. These operations, the report states, are scheduled to take place in parts of the reserve used ‘intensely’ by ‘isolated peoples’ and could, or will, drive away fauna and limit their ability to hunt, limit their access to natural resources such as water, limit their capacity to follow their usual migration patterns, and increase the likelihood of fatal contact.

The VMI’s report states that Pluspetrol’s EIA consistently underestimates the impact that the expansion would have on ‘isolated peoples’ and expresses particular concern about the company’s ‘Anthropological Contingency Plan’ if contact with them is made, asking Pluspetrol to re-write it. It also notes the company’s apparent intention to encourage contact with ‘isolated peoples’ by ‘distributing timetables especially designed for the population in voluntary isolation with information about the project’s activities’, and requests it to abandon any measures that imply making contact.

The VMI’s report needed to be ‘favourable’ for the Energy Ministry to permit Pluspetrol to go ahead with the expansion, but instead it made 83 ‘observations’ which the company must now respond to before seeking the VMI’s opinion a second time. Indeed, one of the report’s conclusions suggests that the VMI can never give a favourable opinion on Pluspetrol’s plans: “Activities that have critical or severe impacts on the health or development of the ways of life of people who are highly vulnerable, like indigenous peoples in initial contact or, even more so, indigenous peoples in isolation, should not be contemplated.”

At around the same time as the government report was issued, the Nahua, an indigenous people in ‘initial contact’ living in the reserve, wrote to the VMI, under their own initiative to inform it that they are opposed to Pluspetrol operating in the headwaters of the River Serjali, where the company intends to conduct its 3D seismic tests and drill nine of the 18 wells. Almost 50% of the Nahua died following sustained contact with outsiders in 1984, and according to the VMI’s report, Pluspetrol’s plans could ‘devastate’ them.

“Our people have decided not to allow Pluspetrol to enter our ancestral territory (the headwaters of the River Serjali),” the Nahua’s letter states.

Following an appeal this year by Peruvian indigenous organisations AIDESEP, COMARU and ORAU, as well as the Forest Peoples Programme (FPP), to the United Nations’ Committee for the Elimination of Racial Discrimination (CERD), the UN Committee wrote to the Peruvian Government urging it to ‘immediately suspend’ the expansion plans, but these concerns were subsequently waived aside by Peruvian Government ministers in a formal hearing in Peruvian congress.

Since the expansion plans were unveiled, indigenous organizations have been continuing to challenge the project, announcing in 2012 that they would be resorting to legal action.

The VMI’s report was officially approved on 12 July 2013 via a ‘vice-ministerial resolution’ signed by Vilca Arpasi.

The reserve for ‘isolated peoples’ called the Kugapakori-Nahua-Nanti Reserve, was established in 1990 and given superior legal protection in 2003 by a Supreme Decree stating that, among other things, ‘existing rights to exploit natural resources must be exercised with the maximum considerations to guarantee that they don’t affect the rights of the indigenous populations who live in the reserve.’

The VMI, situated within Peru’s Ministry of Culture, is the Peruvian Government’s institution responsible for indigenous peoples and their rights.