“Supraglacial lakes” – bodies of water that collect on the surface of the Greenland Ice Sheet – lubricate the bottom of the ice when they drain, causing it to flow faster. Now, researchers have discovered that differences in how the lakes drain, how quickly or how slowly, can affect the speed and direction of glacial movement.

Researchers from the City College of New York (CCNY), the University of Cambridge in the United Kingdom and Los Alamos National Laboratory in New Mexico report the findings in the journal Environmental Research Letters.

“Knowledge of the draining mechanisms allows us to improve our understanding of how surface melting can impact sea level rise, not only through the direct contribution of melt water from the surface, but also through the indirect contributions on the mass loss,” according to Marco Tedesco, the principal investigator and lead author on the paper.

Tedesco, an associate professor in the CCNY’s Department of Earth and Atmospheric Sciences, is currently on a temporary assignment as the program director for the National Science Foundation‘s polar cyber-infrastructure program. The research described in the paper was funded before he accepted the position at NSF.

Over the past decade, surface melting in Greenland has increased considerably.

Previous research already suggested that the water injected from the rapid draining of the supraglacial lakes controlled sliding of ice over the bed beneath it. However, there was no evidence of the impact of the slow draining mechanism, which the paper identified.

Tedesco and his colleagues documented two different drainage mechanisms, slow versus fast, for supraglacial lakes. The findings are based on analysis of data collected in 2011 from five GPS stations the team installed around two supraglacial lakes in the Paakistoq region of West Greenland.

The smaller of the two lakes, Lake Half Moon, overflowed its banks and drained from the side to reach a moulin – a roughly circular, vertical to nearly vertical well-like shaft within a glacier through which water enters from the surface. It took approximately 45 hours to empty. The larger lake, Lake Ponting, drained through a crack in the ice beneath it and was voided in around two hours.

At first, a crack in the ice beneath the lake may be small, but it deepens as water enters it because the pressure of the water overcomes the compressive action of the ice, which is trying to close the crack, Tedesco explains. When the crack reaches the bed beneath the glacier, which could be 1,000 meters (3,280 feet) or more below the surface, the lake empties rapidly, like a bathtub after its plug is pulled.

Drainage from both lakes accelerated glacial movement. However, water from Lake Ponting caused the glacier to move faster and farther. While the slower drainage from Lake Half Moon caused the glacial pace to increase from baseline values of 90-100 meters (295-328 feet) per year to a maximum of around 420 meters (1,377 feet) a year, glacial movement in the area affected by Lake Ponting reached maximum velocities of 1,500-1,600 meters (4,920-5,249 feet) per year, nearly four times greater.

The drainage of the two lakes impacted the glacier’s trajectory differently, as well. The emptying of Lake Half Moon via the moulin did not change the direction of glacial movement. However, when Lake Ponting drained, a slight southerly shift in the glacier’s direction was detected.

Because the different draining mechanisms affect ice velocity, they could also affect the amount of ice lost through calving of glaciers, which results in icebergs, Tedesco points out. Because what happens on a glacier’s surface impacts what is going on below, researchers are trying to look at glaciers as a system instead of independent components, he adds.

“The surface is like the skin of a tissue and the subglacial and englacial channels that develop because of the surface water act like arteries or veins that redistribute this water internally.” 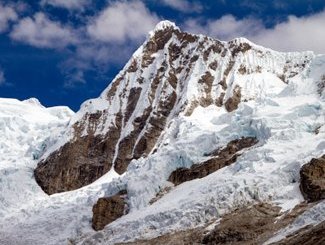