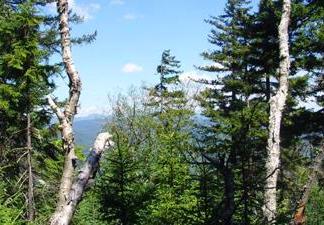 Air pollution is related to forest decline and also appears to attack the protecting wax on tree leaves and needles. Bonn University scientists have now discovered a responsible mechanism: particulate matter salt compounds that become deliquescent because of humidity and form a wick-like structure that removes water from leaves and promotes dehydration. These results are published in the journal Environmental Pollution.

“Our study reveals that so-called wax degradation on pine needles may develop from deposited particulate matter,” says Dr. Jürgen Burkhardt from the Institute of Crop Science and Resource Conservation. Wax helps to protect leaves and needles from water loss.

It has long been known that air pollutants accelerate wax ageing and that “wax degradation” is closely related to forest damage.

“Wax degradation was addressed by many studies in the 1980s and 90s, but sound explanations for both the degradation mechanism and the high correlation with forest damage have yet been missing,” Dr. Burkhardt reports.

The scientists sprayed salt solutions on Scots pine needles and recorded their weight loss after abscission. The needles treated with salt solutions dried out significantly faster than the untreated control needles. Using an electron microscope, the scientists observed the salts becoming deliquescent and moving into the stomata of the needles. Stomata are tiny pores used by plants to take up carbon dioxide for photosynthesis and release water vapor and oxygen. The deliquescent salts form very thin liquid connections between the surface and interior of the needle, and water is removed from the needles by these wick-like structures. Because the plants are unable to counteract this removal of water, the plants dehydrate more rapidly. Therefore, polluted air containing large amounts of particulate matter may directly reduce the drought tolerance of trees.

A new type of electron microscope enabled the observation of particle deliquescence and dynamics under changing air humidity. In addition, a long-lasting scientific paradigm had excluded any aqueous movement into the stomata, and only recently had Bonn University scientists confirmed its existence. (URL: http://www3.uni-bonn.de/Pressemitteilungen/227-2012)

Recently, regional forest damage has been reported in the western USA and other parts of the world. A relationship with increasing climate change-type drought has been proposed, but the newly discovered mechanism involving particulate matter might contribute to the regional forest damage. “Particularly because air concentrations of hygroscopic particles have largely increased within the last decades,” says Dr. Burkhardt.

The study was funded by the Deutsche Forschungsgemeinschaft and the European Union (Project ÉCLAIRE).

Check the following link to read/download the Full Study – “Particulate Pollutants are Capable to ‘Degrade’ Epicuticular Waxes and to Decrease the Drought Tolerance of Scots Pine (Pinus sylvestris L.)”:
http://www.ncbi.nlm.nih.gov/pubmed/23791043