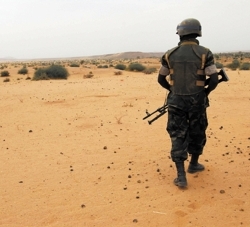 Berkeley – Shifts in climate are strongly linked to human violence around the world, and according to a new study by researchers at the University of California, Berkeley and Princeton University, even relatively minor departures from normal temperatures or rainfall can substantially increase the risk of conflict.

The study, which includes more data than prior research in this field and covers all major regions of the globe, shows the Earth’s climate plays a more influential role in human affairs than previously thought. The results were published on Thursday, August 1, in the journal Science.

The authors found similar patterns of conflict around the world that were linked to changes in climatic, such as increased drought or higher than average annual temperature. Examples include spikes in domestic violence in India and Australia; increased assaults and murders in the United States and Tanzania; ethnic violence in Europe and South Asia; land invasions in Brazil; police using force in the Netherlands; civil conflicts throughout the tropics; and even the collapse of Mayan and Chinese empires.

The study could have critical implications for understanding the impact of future climate change on human societies, as many climate models project global temperature increases of at least 2 degrees Celsius over the next 50 years.

The study draws on a variety of research fields including climatology, archaeology, economics, political science and psychology to provide a comprehensive look at how climatic changes shape human conflict and violence.

“What was lacking was a clear picture of what this body of research as a whole was telling us,” said Solomon Hsiang, the study’s lead author, who was a postdoctoral fellow in Science, Technology, and Environmental Policy at Princeton during the research project and is now an assistant professor of public policy at UC Berkeley’s Goldman School of Public Policy. “We collected 60 existing studies containing 45 different data sets and we re-analyzed their data and findings using a common statistical framework. The results were striking.”

They examined various aspects of climate such as rainfall, drought or temperature, and their associations with various forms of violence within three broad categories of conflict:

The results proved all three types of conflict exhibit systematic and large responses to changes in climate, with the effect on intergroup conflict being the most pronounced. Conflict responded most consistently to temperature, with all 27 out of 27 studies of modern societies finding a positive relationship between high temperatures and greater violence.

A central contribution of the study was to develop a method for comparing results around the world, because the nature of climatic events differs across locations.  The authors’ new approach was to convert climate changes into location-specific units known to statisticians as standard deviations.

“We found that a 1 standard deviation shift towards hotter conditions causes the likelihood of personal violence to rise 4 percent and intergroup conflict to rise 14 percent,” said Marshall Burke, the study’s co-lead author and a doctoral candidate at UC Berkeley’s Department of Agricultural and Resource Economics.

“We often think of modern society as largely independent of the environment, due to technological advances, but our findings challenge that notion,” said study coauthor Edward Miguel, UC Berkeley’s Oxfam Professor of Environmental and Resource Economics and director of the Center for Effective Global Action (CEGA) based at UC Berkeley.

“Our results shed new light on how the future climate will shape human societies,” said Burke. The findings of the study suggest that a global temperature rise of 2 degrees Celsius could increase the rate of intergroup conflicts, such as civil wars, by over 50 percent in many parts of the world.

The researchers said that exactly why climate affects conflict and violence is the most pressing question for future related research. While the study finds strong evidence that climatic events may be a cause of conflict, the researchers stressed that they are not claiming that climate is the only or primary cause of conflict, cautioning that conflict dynamics are complex and remain poorly understood.

Check the following link to read/download the Full Study – “Quantifying the Influence of Climate on Human Conflict”:
http://www.sciencemag.org/content/early/2013/07/31/science.1235367.abstract

Curtain Raiser on ‘States and Climate Change’ Held at FICCI