Lima, Peru – A new peer-reviewed study, released on December 2 at the start of the UN Climate Change Conference in Peru, reveals the unprecedented amount of carbon stored within the nine-nation network of Amazonian indigenous territories and protected natural areas.

Accepted for publication in Carbon Management, the paper, titled “Forest Carbon in Amazonia: The Unrecognized Contributions of Indigenous Territories and Protected Natural Areas”, suggests that protecting the vast amount of carbon stored above-ground in the forests of indigenous and protected lands – totalling 55% of the Amazon – is critical to the stability of the global climate as well as to the cultural identity of forest-dwelling peoples and the health of the ecosystems they inhabit.

“We see, for example, that the territories of Amazonian indigenous peoples store almost a third of the region’s above-ground carbon on just under a third of the land area,” said Woods Hole Research Center (WHRC) scientist Wayne Walker. “That is more forest carbon than is contained in some of the most carbon-rich tropical countries including Indonesia and the Democratic Republic of the Congo.”

Yet the authors also find that nearly 20% of tropical forests across Amazonia are at risk from legal and illegal logging, construction of new roads and dams, and the expansion of commercial agriculture, mining, and petroleum industries, pressures which are exacerbated in many countries because governments have failed to recognize or enforce indigenous land rights.

“We have never been under so much pressure, as this study demonstrates,” said Edwin Vásquez, co-author and president of COICA, the Indigenous Coordinating Body of the Amazon Basin, which represents indigenous groups in the region. “Yet we now have evidence that where there are strong rights, there are standing forests. And knowing that we have more than half of the region’s carbon on indigenous and protected lands, we can tell our leaders so they can strengthen the role and the rights of indigenous forest peoples.”

The paper is the result of a novel north-south collaboration among scientists, Amazonian indigenous and NGO networks, and environmental policy experts who combined satellite measurements of carbon density, field data and boundary records of indigenous territories and protected areas.

“Until recently, an analysis of this scope would not have been possible; however, the availability of consistent and accurate spatial data across large areas like the Amazon has made a tremendous difference,” according to scientist Alessandro Baccini, also of WHRC.

The Amazon is comprised of 2,344 indigenous territories and 610 protected areas, spread across nine countries. These areas are exceptional in terms of biological, cultural and linguistic diversity. They are also considered the corner-stone of Amazon conservation efforts, since they serve as social and natural barriers to the advance of agriculture and forest fires. In countries such as Brazil, with historically high levels of deforestation, indigenous forests and protected areas are seen as vital to combating carbon dioxide emissions from deforestation and forest degradation. 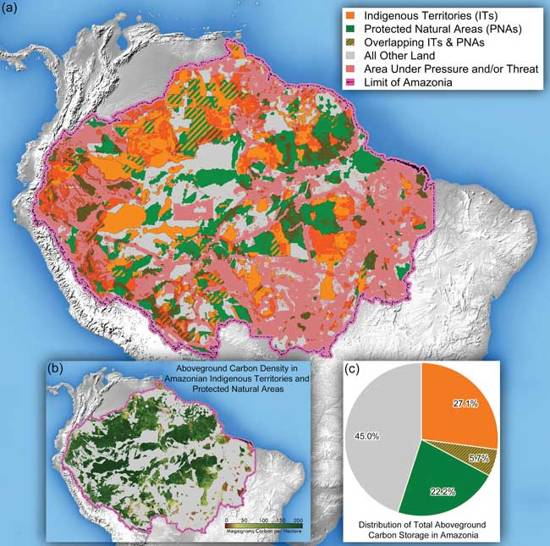