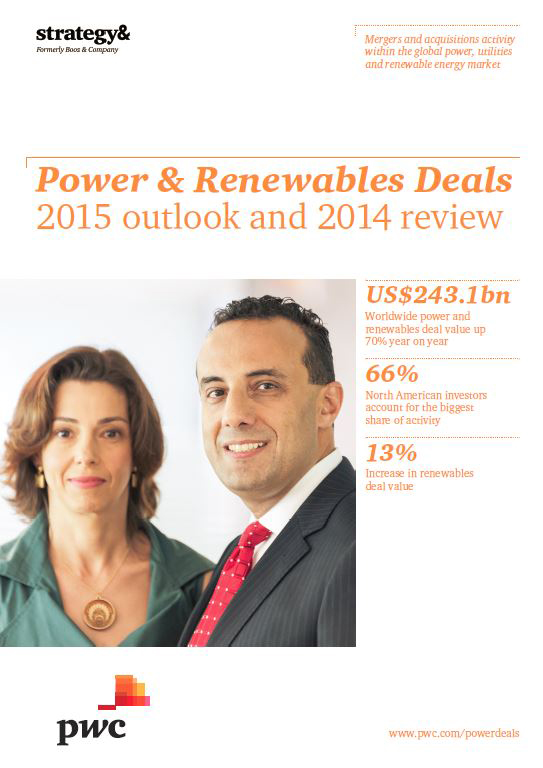 London: Global M&A value in the power and renewables sector has reached the highest level seen in the current decade – up 70% year – on – year – and any further upward movement would begin to move sector deal value back towards the heady levels last seen before the credit crunch, according to PwC and Strategy&’s latest annual Power and Renewables Deals report.

The report states there is plenty of potential in the global power and renewables M&A pipeline but the latest surge may not be indicative of the long – term trend. A more globally – balanced spread of deals is expected in 2015 with fewer of the US mega-deals that buoyed 2014 totals. But the flow of divestment – and privatization  – driven deals looks strong and so there are plenty of reasons to think any dip in US deal value will be taken up, in part at least, by activity elsewhere. It also finds:

Andrew McCrosson, partner, PwC power and utilities said: “We see plenty of potential deal flow in the pipeline but there’s likely to be an element of ‘wait and see’ as deal makers take stock of a changed energy pricing environment. There are also a number of wider economic uncertainties to give investors some pause for thought, not least the risk of deflation. But this is also likely to heighten interest in the stable contracted or regulated returns available in the sector.”

The report maps a number of deal hot spots and investment opportunities around the world in the power and renewables sector for the year ahead. In particular,
it notes:

Rob McCeney, partner, US power and utilities, PwC, said: “US power utility companies continue to see value in divesting non – regulated assets and focusing on regulated returns while, in parallel, independent power producers are looking for opportunities to optimise the value of their generation portfolios. With these conditions and the increasing acquisition activities of ‘yieldcos’, we expect to see strong US power and renewables deal flow, although some companies will need to pause for breath while they bed down recent deals.”

The big new factor in the mix is falling energy prices and this will add an extra dynamic into the all – important regulatory environment for companies.

Andrew McCrosson, partner, UK power and utilities, PwC, explained: “All eyes will be on the interaction of policy developments and energy prices. We’ve already seen governments becoming active in power pricing and falling prices add a new dimension to this.

“In the UK, one of the first issues for a post-election government will be the findings of the competition investigation into the energy supply market being conducted by the Competition and Markets Authority. Vertical integration will be an issue under consideration and it’s possible that any policy changes could spur M&A moves.

“Longer term, persistently low hydrocarbon prices could also challenge the economics of renewables and nuclear generation, in parts of the world where these do not have stable policy support.”

Most British Shoppers Willing to Buy ‘Ugly’ Fruits and Vegetables