Lima, Peru – Global emissions have reached a new peak, but recent developments indicate a new readiness for action on climate protection. This is the message of the 10th edition of the Climate Change Performance Index (CCPI), a ranking of the climate protection performance of the 58 highest emitters worldwide, published by Germanwatch and Climate Action Network (CAN) Europe at the United Nations Climate Change Conference in Lima on December 8.

“We see global trends, indicating promising shifts in some of the most relevant sectors for climate protection,” says Jan Burck of Germanwatch, author of the Index. “The rise of emissions has slowed down, and renewables are rapidly growing due to declining costs and massive investments.”

In some countries like Denmark (Rank 4), Sweden (Rank 5) and the United Kingdom (Rank 6), the result is decreasing emissions. On the other side of the globe, China, the world’s biggest emitter, shows improvements in the energy efficiency sector and massive investments in renewables. Most recent developments indicate China’s decade long coal boom seems to be over, offering new hope for global climate protection. 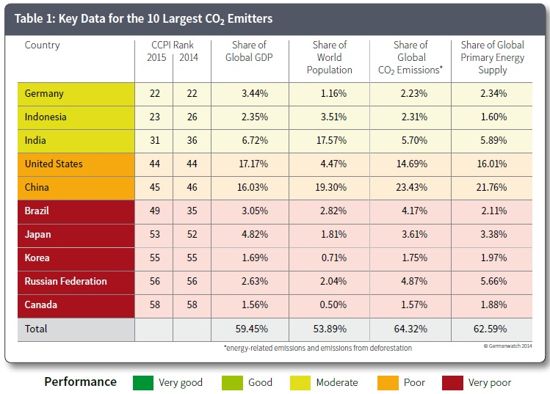 “Data showing declining emission growth rates together with promising political signs, suggesting that we are able to stabilize global emissions. The Paris Climate Summit in 2015, where countries will make new commitments for climate action, could be a turning point in this respect,” adds Burck.

In Europe, the Index shows a mixed picture. “Many EU countries ranked high this year, but others, like Poland (Rank 40) and Bulgaria (Rank 41) scored poorly because of their opposition to further steps nationally and in the EU,” explains Wendel Trio, Director of CAN Europe. 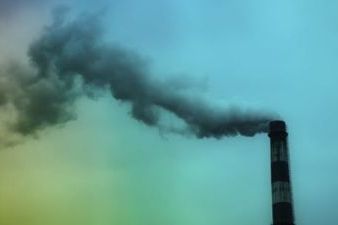 “Neither the current 2020 nor the new 2030 climate target are in line with the reductions needed by Europe to avert catastrophic climate change and achieve 100% renewables by 2050. To do this, Europe must meet its target to reduce energy consumption by 20% by 2020 against projections, phase out all fossil fuel subsidies immediately and agree on a fundamental reform of its Emissions Trading Scheme before the Paris Climate Summit,” Trio concludes.

One of the biggest winners in the new Index is Morocco. It jumped into the Top Ten because of its extraordinary renewables policy. With a very good international climate policy evaluation, Mexico also ranks among the Top 20.

In Canada (Rank 58), nothing has changed and nothing is going forward at the state level. For industrialised countries, this bad performance is only beaten by Australia (Rank 60), where the new conservative government reversed the climate policies previously in effect. In between these two, Kazakhstan (Rank 59) and at the very bottom Saudi Arabia (Rank 61) comprise the bottom four.