Gland, Switzerland – The invisibility of soy on supermarket shelves masks the major contribution that it makes to environmental destruction and degradation, a new WWF overview of soy related issues has found.

“We consume more soy than we realise, but it is the soy that goes into pork, chicken and processed foods not the soy in tofu and sauce that is the real issue,” said WWF’s global soy lead Sandra Mulder. “More than half a kilogram of soy can be going into a kilogram of chicken.”

“Rapid growth in the demand for soy destined for animal feed is a key driver for clearing significant forests, savannah and grasslands, including the Amazon, Cerrado, Atlantic Forest, Chaco and Chiquitano Forest that cover most of Brazil, Argentina, Bolivia and Paraguay and the North American prairies, and increasing the vulnerability of species that include jaguar, giant anteater, armadillo and macaw.”

“The Growth of Soy: Impacts and Solutions” highlights how and why soy production has risen 10-fold over the past 50 years and is expected to double again by 2050. Some 46 million hectares, an area significantly larger than Germany, is now devoted to soy cultivation in Latin America, with much of the expansion being directly carved out of natural areas or displacing other agricultural or pastoral clearing into natural areas. 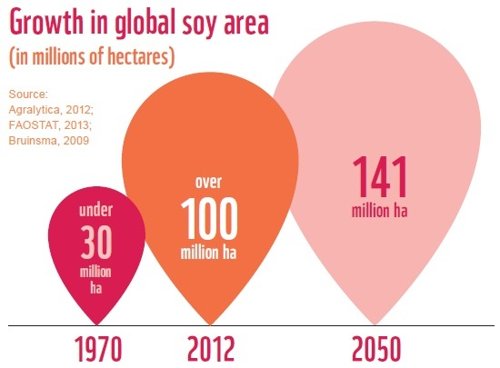 WWF maintains that it is possible to greatly reduce the negative impacts of soy, but that firm action from governments, a concerted push for environmental and social sustainability along the whole soy value chain, and support from financiers and consumers will be required to achieve it.

Measures highlighted in the report include vastly improved land use planning, protection of vulnerable and valuable areas, certification schemes such as the Round Table on Responsible Soy (RTRS), better  and waste reduction.

Align Consumption of Animal Protein to Health and Nutrition Guidelines

Consumers in developed countries could help keep soy demand in check by aligning their consumption of animal proteins with government health recommendations and reducing food waste.

Over recent decades, soy has undergone the greatest expansion of any global crop and WWF is calling on all elements of the soy value chain to take action to ensure that the soy business does not harm nature or people. With about three quarters of the 270 million tonnes produced in 2012 going into animal feed, this call is particularly relevant to companies producing and selling meat and animal feed.

The link between soy and animal protein consumption is most graphically illustrated with poultry meat, with a 711 per cent increase in production over the 40 years to 2007. Recent research in the Netherlands revealed that an average 575 grammes of soy is consumed for each kilo of poultry product produced. 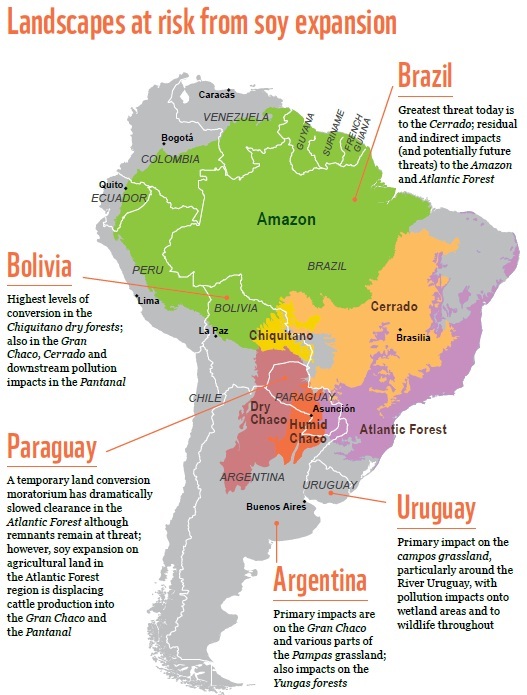 Check the following link to read/download the Full Report:
http://wwf.panda.org/what_we_do/footprint/agriculture/soy/soyreport/