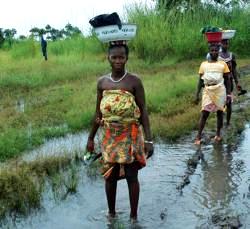 The rush for farmland by foreign investors engaged in industrial-scale plantation agriculture in Sierra Leone has increased poverty and food shortages among communities who have lost their access to land, new research shows.

An estimated fifth of the country’s arable land has been leased since 2009 to industrial farming concerns, many of them foreign companies producing biofuels from crops such as oil palm and sugar cane.

A report published on July 26 titled, “Who Is Benefitting?” examines the impact large land leases held by three investors has had on local communities. It was commissioned by local joint initiative Action for Large-scale Land Acquisition Transparency (ALLAT), with support from Christian Aid and other international development agencies.

As a result of its findings, the report calls for a review of all existing contracts, and a moratorium on further large scale land investment until existing concerns are addressed, and future contracts can be independently monitored.

The report says that in particular, government contracts with large investors, some who have been granted 99-year leases, need to be more transparent and respect the country’s laws, and government and companies must implement international guidelines that emphasize the protection of local people and the environment.

The report also criticizes the tax breaks offered to foreign companies to persuade them to invest, which it says costs Sierra Leone many millions of dollars each year in lost revenue.

Kato Lambrechts of Christian Aid identified as a key problem government claims that just 11-15 per cent of the country’s arable land is being ‘used’ and that there is plenty of room for foreign investors.

“This  shows a lack of understanding of the way the country’s smallholder farmers, who account for nearly half of working age Sierra Leoneans, use the land,” she said. “They rely on an extremely diverse and complex mosaic of land types – upland farms, land depressions prone to flooding, swamps, tree-crop plantations, fallow bush and riverine grass areas to grow a wide variety of crops.”

“Much of this land is deemed ‘unused’ – but that is far from the case. Communities are promised development in various forms such as jobs and services if they sign over land, but only a few ever see real benefits.”

“When they lose access to the land, they lose the ability to grow mineral and vitamin rich fruits and vegetables which impacts badly on food security and nutrition. People are struggling to purchase food, or going without.”

“Communities in all three of the areas investigated reported increased levels of poverty, poorer and fewer meals eaten each day, children, especially girls, taken out of school, and increased incidents of social ills such as teenage pregnancy, broken marriages and theft.”

In two of the leases investigated, compensation had been paid to local communities for trees destroyed, but was seen as inadequate. The third company, Sierra Leone Agriculture, maintained that no trees had been destroyed in setting up their enterprise.

In all three lease areas, local people said they would not have agreed to the land deals were it not for promises made to them about jobs, and the building of roads, along with improved health and education facilities, electricity, and water wells. These had not been fulfilled to their expectations, with the companies maintaining that they need to start full production and receive returns on their investment before they can create all the jobs that have been promised.

Sierra Leone, which is struggling to rebuild after a lengthy civil war, ranks among the world’s least developed countries, at 180th of 187 nations on the 2011 United Nations’ Human Development Index.

Life expectancy at birth is 47.8 years, under-five mortality is one of the highest in the world at 192 per 1,000 live births, and adult literacy is about 41%. In total, some 70% of its population of about 5.5 million falls below the national poverty line of US $ 2 a day.

A look at the tax breaks enjoyed by two of the leaseholders, Addax Bioenergy (SL) Ltd., and Socfin Agricultural Company Ltd., along with a third company, Goldtree Ltd., reveal that an estimated total of US $ 18.8million a year is lost in foregone revenue to the government every year in respect of just those three deals.

The report says that if just half that amount last year was directed towards agricultural development, it would have allowed the government to triple the food security budget.

“There is an urgent need to reduce rural poverty and improve the well-being of the nation’s smallholder farmers,” added Ms. Lambrechts. “They are the backbone of the economy and need support if they are to overcome the challenges posed by cheap and subsidized imported foods, poor rural infrastructure, and access to basic amenities such as clean water, education and health facilities, degraded lands and climate change.”

“The solutions, however, are not to be found by leasing their fertile land out to foreign investors for industrial plantations, with promises that this will bring development. It is a risky and poorly thought-out policy.”

The report was commissioned by Action for Large-scale Land Acquisition Transparency (ALLAT) with support from Christian Aid (UK), Interchurch Organization for Development Cooperation (ICCO), The Netherlands, the Catholic Organisation for Relief and Development AID (Cordaid), The Netherlands, and Bread for All (Development Service of the Protestant Churches in Switzerland).

The report was also supported by Arbeitsgemeinschaft für Entwicklungshilfe (AGEH), Germany, Green Scenery, the Sierra Leone Network on the Right to Food (SiLNoRF), Rural Agency for Community Action Programme (RACAP), and United for the Protection of Human Rights (UPHR).

Check the following link to read/download the Full Report:
http://www.christianaid.org.uk/images/who-is-benefitting-Sierra-Leone-report.pdf

Christian Aid is a member of the ACT Alliance, a global coalition of 125 churches and church-related organizations that work together in humanitarian assistance, advocacy and development. Christian Aid works in some of the world’s poorest communities in around some 50 countries at any one time, and provides urgent, practical and effective assistance in tackling the root causes of poverty as well as its effects. For more information, visit www.christianaid.org.uk.

Preserving Biodiversity can be Compatible with Intensive Agriculture