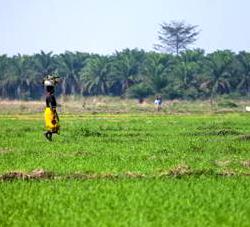 Washington, D.C. – Sub-Saharan Africa is home to nearly half of the world’s usable, uncultivated land but so far the continent has not been able to develop these unused tracts, estimated at more than 202 million hectares, to dramatically reduce poverty and boost growth, jobs, and shared prosperity.

According to a new World Bank report, “Securing Africa’s Land for Shared Prosperity”, released on July 22, African countries and their communities could effectively end  ‘land grabs’, grow significantly more food across the region, and transform their development prospects if they can modernize the complex governance procedures that govern land ownership and management over the next decade. Africa has the highest poverty rate in the world with 47.5 percent of the population living below US $ 1.25 a day.

“Despite abundant land and mineral wealth, Africa remains poor,” says Makhtar Diop, World Bank Vice President for Africa. “Improving land governance is vital for achieving rapid economic growth and translating it into significantly less poverty and more opportunity for Africans, including women who make up 70 percent of Africa’s farmers yet are locked out of land ownership due to customary laws. The status quo is unacceptable and must change so that all Africans can benefit from their land.”

The report notes that more than 90 percent of Africa’s rural land is undocumented, making it highly vulnerable to land grabbing and expropriation with poor compensation. However, based on encouraging evidence from country pilots in African countries such as Ghana, Malawi, Mozambique, Tanzania, and Uganda, Securing Africa’s Land for Shared Prosperity suggests an action plan that could help revolutionize agricultural production, end land grabbing, and eradicate extreme poverty in Africa.

An Action Plan for Change

The report suggests that Africa could finally realize the vast development promise of its land over the course of the next decade by:

The new report says it would cost African countries and their development partners, including the private sector, US $ 4.5 billion spread over 10 years to scale up these policy reforms and investments.

“Improving the performance and productivity of Africa’s agricultural sector is vital for broad-based growth, more jobs, investment, and substantially less poverty,” says Jamal Saghir, World Bank Director for Sustainable Development in Africa. “Land governance is a proven pathway to achieving transformational change and impact that will help secure Africa’s future for the benefit of all its families.”

Opportunities for Change have Never Been Better

Surging food commodity prices and foreign direct investment have increased the potential return on investing in effective land administration through higher agricultural yields and better market access and prices. Most African countries already have the basic land laws in place that recognize customary land rights and gender equality which are essential to reinforce needed reforms.

In addition, new satellite and information technologies can greatly reduce the cost of land administration. A growing number of African countries are now using these technologies to reduce the costs of surveying and mapping land and computerizing their land registries to improve efficiency and reduce corruption.

Some 26 African countries have established at least one continuously operating reference station (CORS) and about 50 CORS are contributing data to the African geodetic reference system, which, once completed, will provide a uniform coordinate reference system across the continent.

With only 10 percent of Africa’s rural land registered, inefficient land administration means that it takes twice as long and costs twice as much to transfer land compared to industrialized countries, and weak governance is the leading cause for corruption in the land sector.

The report warns that “…unless communal and individual land rights are registered and land governance is improved, the recent surge in foreign direct investment in Africa will not generate shared and sustained growth, as disruptions will likely arise from the dispossession of local communities, and investors’ deals will face severe uncertainty or collapse, as witnessed in Madagascar in 2009.”

The report notes successful examples of how African governments have undertaken tough reforms, enacted laws and implemented progressive land policies that have benefited poor communities. Highlighting the need for greater capacity, the report finds that Ghana, Kenya and Uganda each have fewer than 10 professional land surveyors per one million people, compared to 197 in Malaysia and 150 in Sri Lanka. Of Kenya’s 206 registered land surveyors, only 85 were found to be practicing. The report points to the futility of building capacity without making complementary investments in land administration.

“Land governance issues need to be front and center in Africa to maintain and better its surging growth and achieve its development promise,” says Frank Byamugisha, author of the report and Lead Land Specialist in the World Bank’s Africa Region. “Our findings provide a useful, policy-oriented roadmap for African countries and communities to secure their own land for building shared prosperity.”

As of 2002, at least 20 countries in Sub-Saharan Africa had recognized customary land rights and gender equality, a number that has nearly doubled. The African Union Commission has developed a land policy framework backed by a five year strategic plan for implementation to 2016.