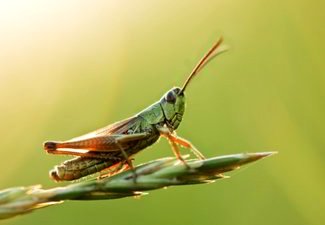 A new study shows that the predator-prey relationship can affect the flow of carbon through an ecosystem. This previously unmeasured influence on the environment may offer a new way of looking at biodiversity management and carbon storage for climate change mitigation.

The study, conducted by researchers at the Yale School of Forestry & Environmental Studies, came out the week of June 17 in the Proceedings of the National Academy of Sciences. It looks at how the relationship between grasshoppers and spiders – herbivores and predators in the study’s food chain – affects the movement of carbon through a wild grassland. The study shows that predators can cause increased carbon retention in plants in the ecosystem.

“We’re discovering that predators are having important effects on shaping the make-up of ecosystems,” says Oswald Schmitz, professor of ecology and one of the co-authors of the study. “But we’ve not really spent a lot of time measuring how that translates into other functions like nutrient cycling and recycling.”

Carbon, the basic building block of all organic tissue, moves through the food chain at varying speeds depending on whether it’s being consumed or being stored in the bodies of plants. However, this pathway is seldom looked at in terms of specific animal responses like fear from predation.

The researchers manipulated the food chains of grassland ecosystem to see how the levels of carbon would change over time. Schmitz and his team created several controlled ecosystems: Some that contained only native grasses and herbs, others that had plants and an herbivore grasshopper, and some others that had plants and herbivores along with a carnivore spider species – all three tiers of the food chain. In addition, a form of traceable carbon dioxide was injected into sample cages covered with Plexiglas, which allowed the team to track the carbon levels by periodically taking leaf, root, and dead animal samples.

The study found that the presence of spiders drove up the rate of carbon uptake by the plants by about 1.4 times more than when just grasshoppers were present and by 1.2 more times than when no animals were present. It also found that the pattern of carbon storage in the plants changed when both herbivores and carnivores were present. When predators were around, the grasshoppers damaged grasses less because they were afraid of being eaten by the spiders, which caused them to be alert and eat less frequently and eat more herbs instead of grass as a preference. Herbivore consumption can cause plants to reduce their photosynthesis and increase respiration, which lets out carbon in the form of carbon dioxide. The predators reverse this physiological process by reducing herbivore damage to plants, leading to greater carbon uptake and storage.

Moreover, the grasses stored more carbon in their roots after the predators alleviated herbivore impacts on plants. These stress responses, then, caused both the plants and the herbivores to change their behaviours and change the composition of their local environment.

The findings have significance for biodiversity conservation and ecosystem management, according to Schmitz. Although the study was carried out on a small scale, the principles that were learned could inform practices done in much larger areas. Places such as the Alaskan wilderness, for example, are home to animals that have the same predator-and-prey dynamics that drive the carbon cycle, and so protecting lands and storing carbon could be linked at the same time. Appreciating the role of predators is also important now because top predators are declining at rates faster than that of many other species in global trends of biodiversity loss, as the study points out.

“It’s going to force some thinking about the vital roles of animals in regulating carbon,” said Schmitz, noting that the UN’s body of scientific experts who study climate change don’t consider these multiplier effects in their models. “People are arguing for a paradigm change.”