A new global standard in assessing environmental risk, the IUCN Red List of Ecosystems, has been trialled on 20 ecosystems spanning six continents and three oceans.

“By knowing which ecosystems are tracking well and which ones are in trouble, governments, industries and local communities will be well-positioned to make smart investment decisions for sustainable environmental management,” says David Keith, leader of the study, published in the Public Library of Science’s journal, PLoS ONE.

The development of the new risk assessment method is seen as a major scientific breakthrough for consistent environmental reporting. Modelled on the influential IUCN Red List of Threatened Species™, the IUCN Red List of Ecosystems will identify if an ecosystem is vulnerable, endangered, or critically endangered. “For the first time, we have a risk assessment method that is applicable worldwide across terrestrial, freshwater and marine ecosystems,” says co-author Emily Nicholson of the University of Melbourne.

“Our goal is to assess all the ecosystems of the world by 2025 and IUCN will continue to do so for large geographical areas, such as continents and ocean basins. But our database is designed to also accommodate studies done at the level of a municipality, a country, or by ecosystem type, as illustrated in the case studies in the PLoS ONE article,” says Jon Paul Rodríguez, leader of the IUCN Red List of Ecosystems project. 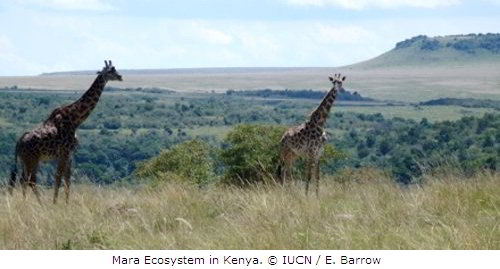 The remote mountain ecosystems of the Venezuelan Tepui are among those at least risk of collapse, according to the study. At the other extreme is the Aral Sea of central Asia, which collapsed during the 1980s and 1990s.

“The lessons from the Aral Sea assessment are sobering” says Richard Kingsford, Director of the Wetlands Centre and co-author of the study. “Not only were a host of species lost forever, but the ecosystem collapse led to socio-economic disaster.”

The Aral Sea fisheries and shipping industry collapsed, while increasing respiratory and digestive illnesses and declining life expectancy are associated with dust storms generated from the dry sea bed.

Eight Australian ecosystems assessed in the trial fall between these extremes. Some of these ecosystems are already in rapid decline, while for others the threats are in the early stages and could more easily be addressed by policy and management decisions to maintain ecosystem diversity and functions.

“Sound environmental management is imperative to maintain functional ecosystems, their biological diversity and the ecosystem services upon which our economies and social well-being depends,” says Edmund Barrow, Head of IUCN’s Ecosystem Management Programme. “This is especially crucial for the developing world.”

The IUCN Red List of Ecosystems is expected to become a one-stop shop for economists, rural communities, local and national authorities, who can use these assessments to better manage the finite resources of our planet.

IUCN is seeking support to complete the global assessment of conservation status of the world’s terrestrial, freshwater, marine and subterranean ecosystems before 2025.

Check the following link to read/download the Full Study – “Scientific Foundations for an IUCN Red List of Ecosystems”:
http://www.plosone.org/article/info%3Adoi%2F10.1371%2Fjournal.pone.0062111

An ecosystem refers to an area of land/water, the biodiversity that lives there and the associated physical environment (air, water, rocks, etc.) that interact together. Examples of ecosystems include lakes, mountains, riverine systems and coral reefs.