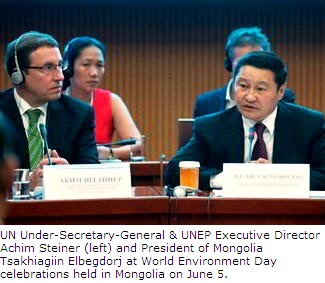 Ulaanbaatar, Mongolia – The United Nations Environment Programme (UNEP) on Wednesday (June 5) announced that Mongolia would be one of the first countries in the Partnership for Action on the Green Economy (PAGE) – a major new initiative to assist the global transition to a green economy.

Speaking during celebrations of World Environment Day in Ulaanbaatar – the capital of this year’s host nation – UN Under-Secretary-General and UNEP Executive Director Achim Steiner said the Mongolian government was committed to ensuring green and sustainable growth.

The initiative between UNEP, the United Nations Industrial Development Organization (UNIDO), the United Nations Institute for Training and Research (UNITAR) and the International Labour Organization (ILO) is a direct response to the outcome document of the UN Conference on Sustainable Development held in Brazil last June. It will initially focus on seven pilot countries and then expand to assist 30 countries by 2020.

“PAGE brings together the UN system to comprehensively assist pioneering countries in their ambition to move their economies into the sustainability space,” he said. “It envisions – through policy switches and inspirational initiatives – a development path that lifts people out of poverty, generates growth, and creates jobs in a way that respects and prizes the environment, and cultural, traditional values.”

Mongolia is developing policies on sustainable mining, renewable energy and ecotourism that will place it on a green development path.

“Environmental issues have been high on the priority agenda for Mongolia,” said Environment and Green Development Minister Sanjaasuren Oyun. “For the last seven or eight years, we have had great growth, from 8-15 per cent, and it is important that we build in good basics of green growth and green economy.”

UNEP plans to engage Mongolia on a host of other issues, including climate change. Mongolia’s 2.1 degree centigrade rise in temperature over the last 70 years has led to drier conditions and degradation of pasture land, placing pressure on traditional herder communities.

“Mongolia’s experience needs to be better understood and responded to by the international community at the upcoming UN climate convention meeting in Warsaw and beyond,” said Mr. Steiner. “This is an issue around which civil society can unite with international organizations given the links here to fragile ecosystems, forestry, water supplies, mining, eco-tourism and energy.”

World Environment Day aims to be the biggest and most widely celebrated global day for positive environmental action, and this year was themed around the UNEP and United Nations Food and Agricultural Organization (FAO) campaign, “Think.Eat.Save. Reduce Your Foodprint”, which is aimed at slashing food waste.

Each year, an estimated one third of all food produced ends up spoiling in the bins of consumers, retailers, farmers and transporters. This 1.3 billion tonnes food, worth around US $ 1 trillion, is enough to feed the 870 million people who go hungry each day several times over. 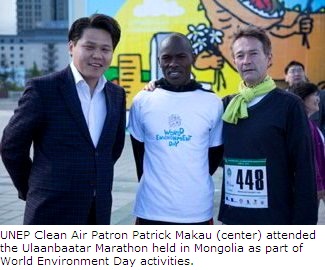 Mongolia held a week of events to mark WED, including International Children’s Day celebrations and the Ulaanbaatar Marathon – which was attended by world marathon record holder and UNEP Clean Air Patron Patrick Makau.

The government also showcased its traditional culture and ecotourism aspirations in Khustai National Park. 21 years ago to the day, the Takhi (or Przewalski) horse was reintroduced to the park from captive-bred Dutch stock after becoming extinct in its native land.

There are now over 280 of the horses living wild in the park, drawing in 9,000 foreign tourists each year.

Mr. Steiner was invited to name a newborn horse, and called her Tunza – a Swahili word meaning ‘to treat with care and affection’ that is also the name of UNEP’s youth programme.

WED is a global celebration, and millions were engaged through events on the ground and a WED Thunderclap – a social media tool that allows users to simultaneously send out a message backing a cause. The Thunderclap reached over 31 million people.

Events were registered in over 70 countries, with close to a million participants organizing conferences, rallies, campaigns and contests themed around food waste.

Some highlights of the global celebrations include: