Exposure of human populations to extreme weather is set to increase as global climate and population size, location and age continue to change, according to a new Royal Society report – “Resilience to Extreme Weather” – published on November 27.

The report presents new maps showing the combined impact of climate and demographic changes across the world on the exposure of people to extreme weather. The maps highlight those areas where there is the greatest increased risk of populations being vulnerable towards to end of the century.

The report focuses on the risks to people from floods, droughts and heatwaves. These are some of the most frequent and damaging extreme events that currently occur and their impacts will change with the changing climate. It shows:

The report calls for action at all levels of government – international, national and local – to make society more resilient to extreme weather events. In 2015, important international agreements will be reached on disaster risk reduction, sustainable development and climate change. These agreements will be much more effective in addressing extreme weather and its impacts if they are linked with, and reinforce, each other.

Professor Georgina Mace, Chair of the Working Group for the report, said: “We are not resilient to the extremes of weather that we experience now and many people are already extremely vulnerable. If we continue on our current trajectory the problem is likely to get much worse as our climate and population change. By acting now, we can reduce the serious risks to our children and grandchildren.”

“National governments have a responsibility to do everything in their ability to protect their people from the devastation caused by extreme weather events.”

Between 1980 and 2004, the total cost of extreme weather-related events came to US $ 1.4 trillion (of which only ¼ was insured). Populations in countries with a low Human Development Index make up only 11% of those exposed to hazards but account for 53% of disaster mortality.

The report compares various practical options for the most effective and affordable defence against the impacts of flooding, droughts and heatwaves. 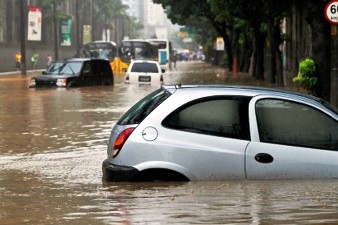 The report concludes that engineered options, such as dams, sea walls and wells are often the most effective at reducing the impact of a particular hazard, but that they are also expensive, and if they fail, they fail cataclysmically. If used in combination with ecosystem-based approaches such as floodplain or mangrove re-establishment and planting vegetation, they can be more effective and affordable as well as delivering wider benefits on an on-going basis – not just when the hazard strikes. These ecosystem or ‘natural’ approaches are often more affordable and can have multiple additional benefits to society.

The Working Group therefore recommends that ecosystem-based approaches are increasingly used in combination with more traditional approaches, although more effort is needed to ensure they are systematically monitored and evaluated. The report uses the ‘Slowing the Flow’ initiative in Pickering, UK, as an example of where this is being done.