Greenhouse gases fell by 3.3% in the EU in 2011, leading to the lowest level of emissions in reports going back to 1990. The decrease in 2011 was also the third largest over this period, according to official data compiled by the European Environment Agency (EEA) and reported by the EU to the United Nations Framework Convention on Climate Change (UNFCCC).

Jacqueline McGlade, EEA Executive Director (left EEA on May 31), said, “The greenhouse gas emissions cut in 2011 is good news, however, it was largely due to a warmer winter. Nonetheless, the EU is making clear progress towards its emission targets.”

She continued, “There was an increase in consumption of more carbon-intensive fuels such as coal, while hydroelectricity production and gas consumption decreased. If Europe is to achieve the transition towards a low-carbon society, it will need sustained investment in technology and innovation.”

Why were Greenhouse Gas Emissions Lower?

The 2011 emissions decrease was largely due to a milder winter in 2011 compared to 2010, which led to a lower demand for heating. The officially reported 2011 emissions were 3.3% lower than the previous year, while the EU experienced a 1.6% growth in GDP.

The reduction in emissions is larger than EEA’s estimates published last year, because the extent of the reduced heating demand only became apparent when complete and final energy data became available. The highest emission reductions were from homes and commerce. 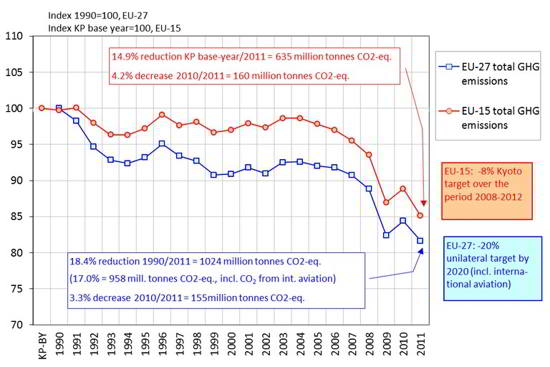 Official total of EU greenhouse gas emissions inventory data submitted to the UNFCCC are only available up to 2011. However, there are other EU emission data sets which provide an increasingly complete picture of emission changes in 2012: