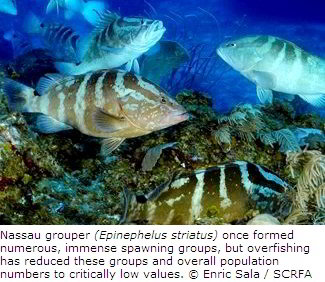 At least 12% of groupers – globally-important food fish species that live on coral and rocky reefs – face extinction, putting the livelihoods of hundreds of thousands of people around the world at risk, finds a report published on April 28 by the International Union for Conservation of Nature Species Survival Commission’s (IUCN SSC) Grouper and Wrasse Specialist Group.

The overall percentage of threatened groupers could be much higher as there is insufficient data for about 30% of the species, according to The IUCN Red List of Threatened Species™.

The study points to overfishing and the booming international luxury seafood trade as major threats to the survival of some grouper species, and to the livelihoods of those who depend on them for food and income. Its authors call for urgent conservation and management efforts to prevent further declines of these species.

“The declines in some grouper fisheries are alarming,” says Yvonne Sadovy, Co-Chair of the IUCN SSC Grouper and Wrasse Specialist Group and lead author of the study. “Most of them are not managed at all and their natural ability to reproduce can’t keep up with increasing demand. The rapidly growing international trade in groupers further reduces their populations.” 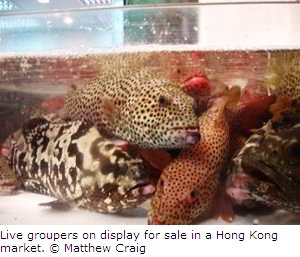 More than 300,000 tons of groupers – or 90 million individuals – were caught globally in 2009, mostly in Asia, where they are particularly sought-after for the luxury restaurant trade. Groupers are the foundation of the US $ 750 million international live reef fish market centred in Hong Kong and growing in mainland China, where consumers are ready to pay over US $ 200 per kilogram of the species. They are also important food fish in developing countries like Indonesia and the Philippines, where pressure to export reef fish is growing, according to the study.

Groupers are among those species that are most vulnerable to fishing because of their longevity, late sexual maturation, and the fact that many form large mating groups known as ‘spawning aggregations’. Despite their economic importance, few grouper fisheries are regularly monitored or managed, and many are in decline.

In the US Caribbean, the Nassau Grouper (Epinephelus striatus), which is commonly fished during its brief aggregation periods, has been essentially wiped out. Of the several dozen well-documented breeding grounds, only two continue to support large numbers of the species, and these have also been considerably reduced. In Southeast Asia and the Pacific, several species are considered to be threatened by the international trade, including the Square-tailed Coral Grouper (Plectropomus areolatus), also often taken from its spawning aggregations. 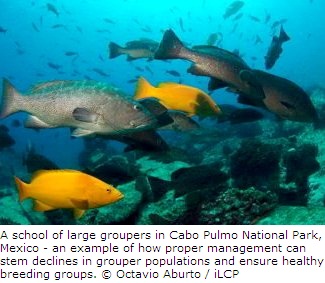 “Overfishing is like mismanaging a bank account,” says Matthew Craig, Co-Chair of the IUCN SSC Grouper and Wrasse Specialist Group and one of the authors of the report. “The current fish population is our principle balance, hopefully earning interest in the form of new fish born. If those initial assets are continually withdrawn faster than the interest accumulates, the principal, that is the fish out there now, will be quickly depleted. It’s easy to see how rapidly we could lose all the money, or in this case, all of the fish.”

Improved management by source countries with priority given to local food security considerations, as well as better monitoring and control of international trade are urgently needed to reduce threats to these species, according to the authors.

The study, “Fishing Groupers towards Extinction: A Global Assessment of Threats and Extinction Risks in a Billion Dollar Fishery”, was published in the journal Fish and Fisheries. It is based on data accumulated by experts over a period of 20 years. 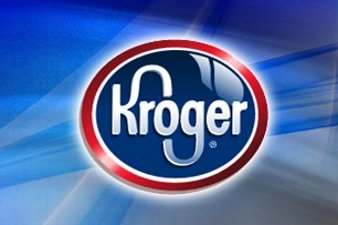