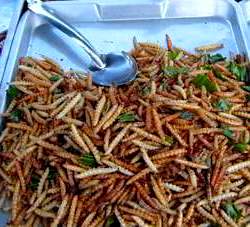 Rome – Forests, trees on farms and agroforestry are critical in the fight against hunger and should be better integrated into food security and land use policies, FAO Director-General José Graziano da Silva said on May 13 at the International Conference on Forests for Food Security and Nutrition held in Rome (13-15 May).

“Forests contribute to the livelihoods of more than a billion people, including many of the world’s neediest. Forests provide food, fuel for cooking, fodder for animals and income to buy food,” Graziano da Silva said. “Wild animals and insects are often the main protein source for people in forest areas, while leaves, seeds, mushrooms, honey and fruits provide minerals and vitamins; thus, ensuring a nutritious diet.”

One major and readily available source of nutritious and protein-rich food that comes from forests are insects, according to a new study Food and Agriculture Organization of the United Nations (UN FAO) launched at the Forests for Food Security and Nutrition Conference. It is estimated that insects form part of the traditional diets of at least 2 billion people. Insect gathering and farming can offer employment and cash income, for now mostly at the household level but also potentially in industrial operations.

An Astounding Array of Creatures

With about 1 million known species, insects account for more than half of all living organisms classified so far on the planet.

According to FAO’s research, done in partnership with Wageningen University in the Netherlands, more than 1900 insect species are consumed by humans worldwide. Globally, the most consumed insects are: beetles (31 percent); caterpillars (18 percent); bees, wasps and ants (14 percent); and grasshoppers, locusts and crickets (13 percent). Many insects are rich in protein and good fats and high in calcium, iron and zinc. Beef has an iron content of 6 mg per 100 g of dry weight, while the iron content of locusts varies between 8 and 20 mg per 100 g of dry weight, depending on the species and the kind of food they themselves consume.

First Steps for the Squeamish

“We are not saying that people should be eating bugs,” said Eva Muller, Director of FAO’s Forest Economic Policy and Products Division, which co-authored the report, “Edible Insects: Future Prospects for Food and Feed Security”.

“We are saying that insects are just one resource provided by forests, and insects are pretty much untapped for their potential for food, and especially for feed,” Muller explained.

Farming insects sustainably could help avoid over-harvesting, which could affect more prized species. Some species, such as meal worms, are already produced at commercial levels, since they are used in niche markets such as pet food, for zoos and in recreational fishing.

If production were to be further automated, this would eventually bring costs down to a level where industry would profit from substituting fish-meal, for example, with insect-meal in livestock feed. The advantage would be an increase in fish supplies available for human consumption.

Bugs Get Bigger on Less

In addition, insects produce a fraction of emissions such as methane, ammonia, climate-warming greenhouse gases and manure, all of which contaminate the environment. In fact, insects can be used to break down waste, assisting in the composting processes that deliver nutrients back to the soil while also diminishing foul odours. 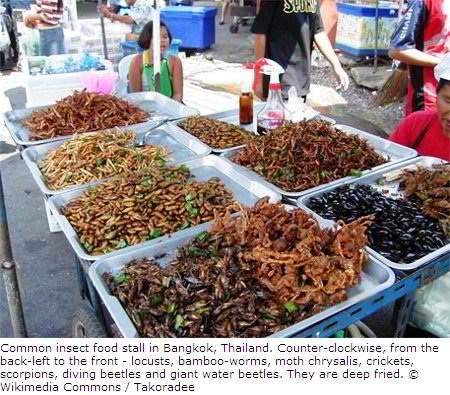 However, legislation in most industrialized nations forbids the actual feeding of waste materials and slurry or swill to animals, even though this would be the material that insects normally feed on. Further research would be necessary, especially as regards the raising of insects on waste streams. But it is widely understood by scientists that insects are so biologically different from mammals that it is highly unlikely that insect diseases could be transmitted to humans.

Regulations often also bar using insects in food for human consumption, although with a growing number of novel food stores and restaurants cropping up in developed countries, it seems to be largely tolerated.