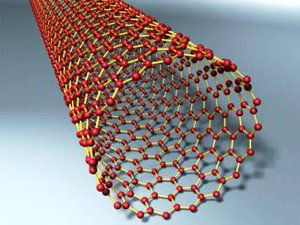 Cambridge, Massachusetts – Batteries might gain a boost in power capacity as a result of a new finding from researchers at MIT. They found that using carbon nanotubes for one of the battery’s electrodes produced a significant increase – up to tenfold – in the amount of power it could deliver from a given weight of material, compared to a conventional lithium-ion battery. Such electrodes might find applications in small portable devices, and with further research might also lead to improved batteries for larger, more power-hungry applications.

To produce the powerful new electrode material, the team used a layer-by-layer fabrication method, in which a base material is alternately dipped in solutions containing carbon nanotubes that have been treated with simple organic compounds that give them either a positive or negative net charge. When these layers are alternated on a surface, they bond tightly together because of the complementary charges, making a stable and durable film.

The findings, by a team led by Associate Professor of Mechanical Engineering and Materials Science and Engineering Yang Shao-Horn, in collaboration with Bayer Chair Professor of Chemical Engineering Paula Hammond, are reported in a paper publish June 20 in the journal Nature Nanotechnology. The lead authors are chemical engineering student Seung Woo Lee PhD ’10  and postdoctoral researcher Naoaki Yabuuchi.

Batteries, such as the lithium-ion batteries widely used in portable electronics, are made up of three basic components: two electrodes (called the anode, or negative electrode, and the cathode, or positive electrode) separated by an electrolyte, an electrically conductive material through which charged particles, or ions, can move easily. When these batteries are in use, positively charged lithium ions travel across the electrolyte to the cathode, producing an electric current; when they are recharged, an external current causes these ions to move the opposite way, so they become embedded in the spaces in the porous material of the anode.

In the new battery electrode, carbon nanotubes – a form of pure carbon in which sheets of carbon atoms are rolled up into tiny tubes – “self-assemble” into a tightly bound structure that is porous at the nanometer scale (billionths of a meter). In addition, the carbon nanotubes have many oxygen groups on their surfaces, which can store a large number of lithium ions; this enables carbon nanotubes for the first time to serve as the positive electrode in lithium batteries, instead of just the negative electrode.

This “electrostatic self-assembly” process is important, Hammond explains, because ordinarily carbon nanotubes on a surface tend to clump together in bundles, leaving fewer exposed surfaces to undergo reactions. By incorporating organic molecules on the nanotubes, they assemble in a way that “has a high degree of porosity while having a great number of nanotubes present,” she says.

Lithium batteries with the new material demonstrate some of the advantages of both capacitors, which can produce very high power outputs in short bursts, and lithium batteries, which can provide lower power steadily for long periods, Lee says. The energy output for a given weight of this new electrode material was shown to be five times greater than for conventional capacitors, and the total power delivery rate was 10 times that of lithium-ion batteries, the team says. This performance can be attributed to good conduction of ions and electrons in the electrode, and efficient lithium storage on the surface of the nanotubes.

In addition to their high power output, the carbon nanotube electrodes showed very good stability over time. After 1,000 cycles of charging and discharging a test battery, there was no detectable change in the material’s performance.

The electrodes the team produced had thicknesses up to a few microns, and the improvements in energy delivery only were seen at high-power output levels. In future work, the team aims to produce thicker electrodes and extend the improved performance to low-power outputs as well, they say. In its present form, the material might have applications for small, portable electronic devices, says Shao-Horn, but if the reported high power capability were demonstrated in a much thicker form – with thicknesses of hundreds of microns rather than just a few – it might eventually be suitable for other applications such as hybrid cars.

While the electrode material was produced by alternately dipping a substrate into two different solutions – a relatively time-consuming process – Hammond suggests that the process could be modified by instead spraying the alternate layers onto a moving ribbon of material, a technique now being developed in her lab. This could eventually open the possibility of a continuous manufacturing process that could be scaled up to high volumes for commercial production, and could also be used to produce thicker electrodes with a greater power capacity. “There isn’t a real limit” on the potential thickness, Hammond says. “The only limit is the time it takes to make the layers,” and the spraying technique can be up to 100 times faster than dipping, she says.

Lee says that while carbon nanotubes have been produced in limited quantities so far, a number of companies are currently gearing up for mass production of the material, which could help to make it a viable material for large-scale battery manufacturing.

Funding: Dupont-MIT Alliance, Office of Naval Research and the MRSEC Program of the National Science Foundation.