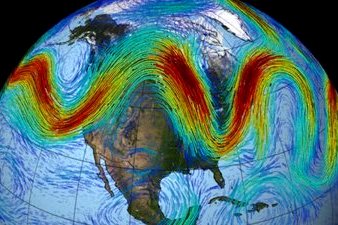 Weather extremes in the summer – such as the record heatwave in the United States that hit corn farmers and worsened wildfires in 2012 – have reached an exceptional number in the last ten years. Man-made global warming can explain a gradual increase in periods of severe heat, but the observed change in the magnitude and duration of some events is not so easily explained. It has been linked to a recently discovered mechanism: the trapping of giant waves in the atmosphere. A new data analysis now shows that such wave-trapping events are indeed on the rise.

“The large number of recent high-impact extreme weather events has struck and puzzled us,” says Dim Coumou, lead author of the study conducted by a team of scientists from the Potsdam Institute for Climate Impact Research (PIK). “Of course we are warming our atmosphere by emitting CO2 from fossil fuels, but the increase in devastating heatwaves in regions like Europe or the U.S. seems disproportionate.”

One reason could be changes in circulation patterns in the atmosphere. By analysing large sets of global weather data, the researchers found an intriguing connection.

An important part of the global air motion in the mid-latitudes normally takes the form of waves wandering around the globe, called Rossby Waves. When they swing north, they suck warm air from the tropics to Europe, Russia, or the U.S.; and when they swing south, they do the same thing with cold air from the Arctic.

However, the study shows that in periods with extreme weather, some of these waves become virtually stalled and greatly amplified. While a few warm days have little impact, effects on people and ecosystems can be severe when these periods are prolonged.

“Behind this, there is a subtle resonance mechanism that traps waves in the mid-latitudes and amplifies them strongly,” says Stefan Rahmstorf, co-author of the study published in the Proceedings of the US National Academy of Sciences (PNAS).

Using advanced data analysis, the new study shows that when certain resonance conditions are fulfilled, the atmosphere tends to develop anomalously slowly propagating waves with large amplitudes, typically associated with extreme weather on the ground. An important finding is that this phenomenon is occurring more often: After the year 2000, it has been almost twice as frequent as before.

“Evidence for actual changes in planetary wave activity was so far not clear. But by knowing what patterns to look for, we have now found strong evidence for an increase in these resonance events.”

The Arctic Factor: Warming Twice as Fast as Most Other Regions

Why would these events be on the rise? Both theory and the new data suggest a link to processes in the Arctic.

Since the year 2000, the Arctic is warming about twice as fast as the rest of the globe. One reason for this is that because the white sea ice is rapidly shrinking, less sunlight gets reflected back into space, while the open ocean is dark and hence warms more.

“This melting of ice and snow is actually due to our lifestyle of churning out unprecedented amounts of greenhouse gases from fossil fuels,” says Hans Joachim Schellnhuber, co-author of the study and Director of PIK. As the Arctic warms more rapidly, the temperature difference to other regions decreases. Yet temperature differences are a major driver of the atmospheric circulation patterns that in turn rule our weather.

“The planetary waves topic illustrates how delicately interlinked components in the Earth system are.” Schellnhuber concludes: “And it shows how disproportionately the system might react to our perturbations.”