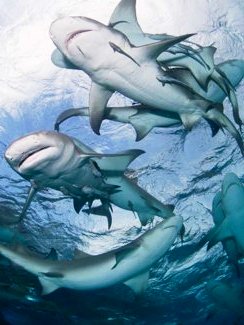 Beijing, China – Prices and sales of shark fin are falling in China by 50-70%, according to a new report released on August 5 by WildAid. The report, titled “Evidence of Declines in Shark Fin Demand, China”, compiles public opinion surveys, surveys from shark fin vendors and traders in the markets of Guangzhou, China (the current center of China’s shark fin trade) and surveys of shark fin price data from Indonesian shark fishermen, as well as trade statistics and media reports.

“Demand reduction can be very effective,” says Peter Knights, Executive Director of WildAid. “The more people learn about the consequences of eating shark fin soup, the less they want to participate in the trade. Government bans on shark fin at state banquets in China and Hong Kong also helped send the right message and this could be a model to address issues, such as ivory.” 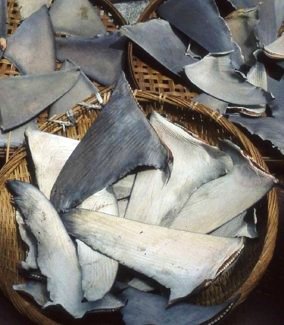 An estimated 100 million sharks are killed yearly with up to 73 million sharks used for their fins, primarily to supply the market in Mainland China. Some shark populations have declined by up to 98% in the last 15 years and nearly one third of pelagic shark species are considered threatened by the International Union for the Conservation of Nature (IUCN).

In the Guangzhou markets, assumed to be the new center of China’s shark fin trade, wholesale traders now complain of dwindling sales and falling prices. Retailers who were selling medium-sized shark fins for as much as US $ 642 per kilogram are now only able to charge half as much. One Guangzhou wholesaler commented that “shark fin is a dying business” and another is quoted saying that “Yao Ming’s commercial impact single-handedly smashed my business,” in reference to WildAid’s ongoing multimedia public awareness campaigns.

Another finding detailed in the report is the increasing public suspicion of fake shark fin in the market. Four of the trader/vendors interviewed in Guangzhou mentioned the fake product as a reason for the decline in their sales, and 43% of the respondents of the consumer survey said they thought that much of the shark fin in the market is artificial.

So while the international shark fin trade continues with devastating consequences for global shark populations, the report suggests a downward trend in both demand and prices in those areas. They further suggest that a combination of awareness campaigns focused on demand reduction and government product bans can and do negatively influence the market for shark fins and, thus, may aid in the conservation of those shark species targeted by the trade.

WildAid is an international 501(c)(3) non-governmental organization (NGO) which focuses on reducing the demand for wildlife products. Their mission is to end the illegal wildlife trade by reducing demand through public awareness campaigns and providing comprehensive marine protection. With a portfolio of celebrity ambassadors and global network of media partners, they are able to deliver high-impact, culturally-sensitive multimedia campaigns, leveraging well over US $ 200 million in pro-bono media support, and reaching one billion people every week. For more information, visit www.wildaid.org.

MoEF Diverting Forestland for Development Projects at much Faster Rate