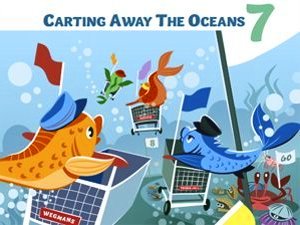 Washington, D.C. – Greenpeace released its 2013 Carting Away the Oceans (CATO) report on May 29, which evaluates and ranks supermarkets on their sustainable seafood policies. This year’s report continues the remarkable trend of industry leaders – including some surprising names – working toward further sustainability, as well as the continued unsustainability of the industry’s bad guys.

Greenpeace’s CATO report has evaluated supermarket sustainability since 2008, and up until this year only Safeway and Whole Foods have earned the “green rating”, but this year the CATO report features three retailers – Safeway, Whole Foods, and Greenpeace’s old nemesis, Trader Joe’s – that have earned green ratings.  In addition, the world’s foremost retail giant, Walmart, has introduced both fish aggregating device (FAD) – free skipjack and pole-and-line albacore in more than 3,000 stores across the country, making affordable and responsibly caught canned tuna available to the majority of the population of the United States for the first time.

The CATO ratings evaluate retailers using a variety of factors – including the sale of “red list” seafood, engagement with conservation initiatives, transparency of supply chain, and the establishment of cohesive internal policies – to score each retailer on a scale of 0-10.

“It’s great news that Walmart, Safeway & Trader Joe’s are all introducing responsibly caught canned tuna options, at a similar price to the environmentally devastating tuna available from Chicken of the Sea, Starkist, and Bumble Bee. This means there’s now a more sustainable seafood option available to almost every consumer in the country, so people don’t have to choose between their bank account and the planet,” said Casson Trenor, Greenpeace Senior Markets Campaigner.

The report also showcases other key issues facing the seafood industry, such as a need for more transparency at point-of-sale and a growing groundswell of opposition to genetically modified salmon, a product that numerous major retailers have already pledged not to sell.

“It’s hard to believe that brands like Kroger, Publix & BI-LO are continuing to sell tuna that’s sourced using destructive fishing methods, and sell red list species that are struggling for survival,” said Trenor. “This seems so far out of step with consumer preferences, which have encouraged most grocery retailers to offer more sustainable seafood options.” 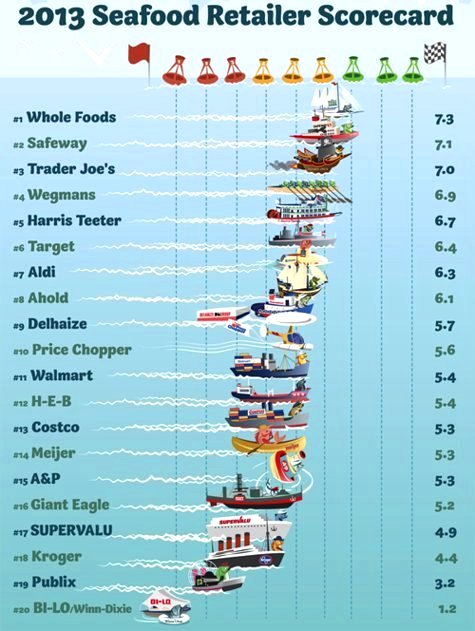 This report comes a few months after Greenpeace released its 8-Bit tuna video game, Shark Vs. Mermaid Death Squad, which targeted Starkist, Bumble Bee, and Chicken of the Sea, and became an online hit shared with over two million viewers.

The 7th Carting Away the Oceans report is available online.

Check the following link to read/download the Full Report:
http://www.greenpeace.org/usa/Global/usa/planet3/PDFs/oceans/CATO%20VII.pdf

5.4 Million Californians Now Live Within a Mile of Oil or...