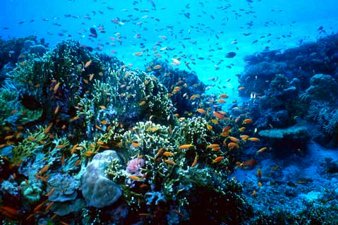 University of Tasmania (UTAS) researchers have announced the results of the largest study so far undertaken of the effectiveness of marine parks designed for nature conservation.

In collaboration with overseas investigators and skilled recreational divers, UTAS biologists counted numbers and sizes of more than 2000 fish species along underwater transect lines set at 1986 sites in 40 countries. They then used this information to measure how fish communities in 87 marine protected areas (MPAs) worldwide differed from those in nearby fished areas. Their findings were published in February in the prestigious journal Nature.

“We found little difference between fishes living in most MPAs and those in nearby fished areas, indicating that many MPAs are not achieving desired conservation outcomes.”

However, some MPAs had massive numbers of large fishes and extremely high conservation value. These effective MPAs typically were no-take, well-enforced, more than 10 years old, relatively large in area, and isolated from fished areas by deep water or sand. MPAs with these characteristics had on average eight times more large fishes, nine times more groupers, and 14 times more sharks than fished areas.

“It is these kinds of MPAs that we need to create and at the same time retrofit the existing MPAs that are unlikely to ever reach their conservation goals,” Prof. Edgar said.

“Given the huge changes now occurring out of sight under water, and our poor knowledge of exactly what is happening and how best to deal with the various threats individually, the need for protected areas that safeguard whole communities of marine species has never been greater,” he added.

“What we do know is that numbers of many Australian marine species have collapsed since European settlement, including some that have disappeared. At present, coastal zoning maps are confusing, with the few conservation gems hidden amongst protected areas that are ineffective because of inadequate regulations or poor enforcement.”

Dr. Rick Stuart-Smith, co-author and a director of the Reef Life Survey (RLS) that co-ordinated the field data collections, praised the efforts of contributing divers, “Such an enormous global effort was only possible with the assistance of a team of more than 100 recreational SCUBA divers, who undertook training in scientific techniques for underwater surveys and voluntarily contributed skills, expertise and a lot of time to data collection for the RLS.”

“The network of contributing volunteers includes people from a range of backgrounds, but all with extensive diving experience and enormous commitment and passion for marine conservation.”

The Reef Life Survey, which is centred at IMAS, was developed by Prof. Edgar and Dr. Stuart-Smith through funding assistance from the former Commonwealth Environment Research Facilities Program and the Marine Biodiversity Hub, a collaborative partnership supported through the Australian Government’s National Environmental Research Program.