Boston, Massachusetts – As hydraulic fracturing is increasingly used for oil and gas extraction across much of the United States and Western Canada, a new Ceres report issued on February 5 shows that much of this activity is happening in arid, water stressed regions, creating significant long-term water sourcing risks for companies operating in these regions as well as their investors.

The report provides first-ever data on oil and gas companies’ water use and exposure to the most water stressed regions, including those in Texas, Colorado and California. It includes recommendations for companies to improve their water management and reduce their overall exposure to water sourcing risks.

“Hydraulic fracturing is increasing competitive pressures for water in some of the country’s most water stressed and drought-ridden regions,” said Ceres President Mindy Lubber, in announcing “Hydraulic Fracturing and Water Stress: Water Demand by the Numbers”. “Barring stiffer water use regulations and improved on-the-ground practices, the industry’s water needs in many regions are on a collision course with other water users, especially agriculture and municipal water use. Investors and banks providing capital for hydraulic fracturing should be recognizing these water sourcing risks and pressing oil and gas companies on their strategies for dealing with them.”

The report is based on water use data from 39,294 oil and gas wells reported to FracFocus.org from January 2011 through May 2013 and water stress indicator maps developed by the World Resources Institute (WRI). It shows that nearly half of the wells were in regions with high or extremely high water stress. (Extreme high water stress regions, as defined by WRI, are areas where 80 percent of available surface and groundwater are already allocated to municipal, industrial and agricultural users.)

The report spotlights eight specific regions with the most intense shale development and water stress challenges in the United States and Canada. It showed that over 55 percent of the wells hydraulically fractured were in areas experiencing drought and 36 percent overlay regions with significant groundwater depletion – key among those, California which is in the midst of a historic drought and Texas, which has the highest concentration of shale energy development and hydraulic fracturing activity in the United States.

“Groundwater is simply not as plentiful as it used to be. We now recognize many competing uses – domestic, agricultural, for energy production and for the environment,” said Jay Famiglietti, Professor and Director Earth System Science, Civil and Environmental Engineering, University of California, Irvine. “Ceres’ report helps us confront difficult decisions about how we might allocate future waters, in particular in regions of considerable water stress.”

In Texas, which includes the rapidly developing Eagle Ford and Permian Basin shale plays, more than half (52 percent) of the wells were in high or extreme high water stress areas. In Colorado and California, 97 and 96 percent of the wells, respectively, were in regions with high or extremely high water stress. Nearly comparable trends were also shown in New Mexico, Utah and Wyoming.

Among hundreds of hydraulic fracturing companies whose water use was evaluated, those with the highest exposure to water sourcing risk are Anadarako (APC), Encana (ECA), Pioneer (PXD) and Apache (APA). Most of the wells being developed by each of these companies are in regions of high or extreme water stress. The top three service providers, Halliburton (HAL), Schlumberger (SLB) and Baker Hughes (BHI) handled about half of the water used for hydraulic fracturing nationally and also face water sourcing risks.

Among the report’s other key findings:

Texas: Texas is ground zero for water availability risks. Hydraulic fracturing-related water use is projected to double there over the next decade even as much of the state continues to face severe drought conditions, key groundwater aquifers are under stress and population growth is surging.

The Eagle Ford faces some of the biggest water challenges nationally. The amount of water used for hydraulic fracturing in this shale play is greater than in any other shale play or basin in the country (19.2 billion gallons from January 2011 to May 2013). Water use per well is also relatively high, averaging over 4.5 million gallons. Shale energy production is placing increased pressure on the counties of Dimmit, Zavala, and La Salle, which have seen groundwater levels decline as much as 100 to 300 feet the last several decades. 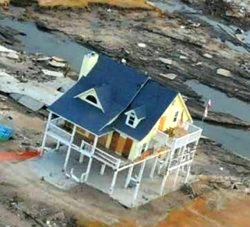