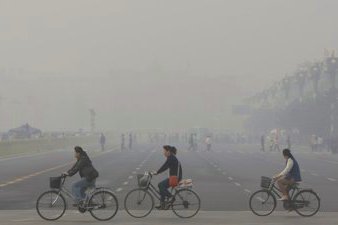 Chinese air pollution blowing across the Pacific Ocean is often caused by the manufacturing of goods for export to the United States and Europe, according to findings by UC Irvine and other researchers published on January 20 in the Proceedings of the National Academy of Sciences.

The study is the first to quantify how much of the pollution reaching the American West Coast is from the production in China of cell-phones, televisions and other consumer items imported here and elsewhere.

“We’ve outsourced our manufacturing and much of our pollution, but some of it is blowing back across the Pacific to haunt us,” said UC Irvine Earth system scientist Steve Davis, a co-author. “Given the complaints about how Chinese pollution is corrupting other countries’ air, this paper shows that there may be plenty of blame to go around.”

Los Angeles experiences at least one extra day a year of smog that exceeds federal ozone limits because of nitrogen oxides and carbon monoxide emitted by Chinese factories making goods for export, the analysis found. On other days, as much as a quarter of the sulfate pollution on the U.S. West Coast is tied to Chinese exports. All the contaminants tracked in the study are key ingredients in unhealthy smog and soot.

China is not responsible for the lion’s share of pollution in the United States. Cars, trucks and refineries pump out far more. But powerful global winds known as “westerlies” can push airborne chemicals across the ocean in days, particularly during the spring, causing dangerous spikes in contaminants. Dust, ozone and carbon can accumulate in valleys and basins in California and other Western states. 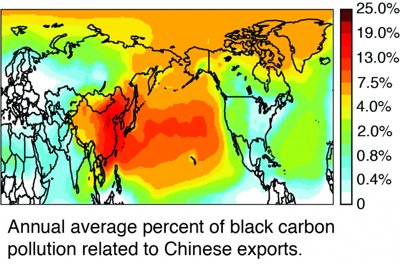 Black carbon is a particular problem: Rain doesn’t easily wash it out of the atmosphere, so it persists across long distances. Like other air pollutants, it’s been linked to a litany of health problems, from increased asthma to cancer, emphysema, and heart and lung disease.

“When you buy a product at Wal-Mart,” noted Davis, an assistant professor, “it has to be manufactured somewhere. The product doesn’t contain the pollution, but creating it caused the pollution.”

He and his fellow researchers concluded, “International cooperation to reduce trans-boundary transport of air pollution must confront the question of who is responsible for emissions in one country during production of goods to support consumption in another.”

Check the following link to read/download the Full Study – “China’s International Trade and Air Pollution in the United States”:
http://www.pnas.org/content/111/5/1736