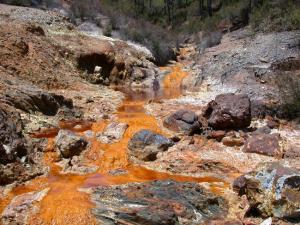 Durham, North Carolina – Much of the naturally occurring radioactivity in fracking wastewater might be removed by blending it with another wastewater from acid mine drainage, according to a Duke University-led study.

“Fracking wastewater and acid mine drainage each pose well-documented environmental and public health risks. But in laboratory tests, we found that by blending them in the right proportions we can bind some of the fracking contaminants into solids that can be removed before the water is discharged back into streams and rivers,” said Avner Vengosh, Professor of Geochemistry and Water Quality at Duke’s Nicholas School of the Environment.

“This could be an effective way to treat Marcellus Shale hydraulic fracturing wastewater, while providing a beneficial use for acid mine drainage that currently is contaminating waterways in much of the northeastern United States,” Vengosh said. “It’s a win-win for the industry and the environment.”

Blending fracking wastewater with acid mine drainage also could help reduce the depletion of local freshwater resources by giving drillers a source of usable recycled water for the hydraulic fracturing process, he added.

“Scarcity of fresh water in dry regions or during periods of drought can severely limit shale gas development in many areas of the United States and in other regions of the world where fracking is about to begin,” Vengosh said. “Using acid mine drainage or other sources of recycled or marginal water may help solve this problem and prevent freshwater depletion.”

The peer-reviewed study was published in late December 2013 in the journal Environmental Science & Technology.

In hydraulic fracturing – or fracking, as it is sometimes called – millions of tons of water are injected at high pressure down wells to crack open shale deposits buried deep underground and extract natural gas trapped within the rock. Some of the water flows back up through the well, along with natural brines and the natural gas. This “flowback fluid” typically contains high levels of salts, naturally occurring radioactive materials such as radium, and metals such as barium and strontium.

A study last year by the Duke team showed that standard treatment processes only partially remove these potentially harmful contaminants from Marcellus Shale wastewater before it is discharged back into streams and waterways, causing radioactivity to accumulate in stream sediments near the disposal site.

Acid mine drainage flows out of abandoned coal mines into many streams in the Appalachian Basin. It can be highly toxic to animals, plants and humans, and affects the quality of hundreds of waterways in Pennsylvania and West Virginia.

Because much of the current Marcellus shale gas development is taking place in regions where large amounts of historic coal mining occurred, some experts have suggested that acid mine drainage could be used to frack shale gas wells in place of fresh water.

To test that hypothesis, Vengosh and his team blended different mixtures of Marcellus Shale fracking wastewater and acid mine drainage, all of which were collected from sites in western Pennsylvania and provided to the scientists by the industry.

After 48 hours, the scientists examined the chemical and radiological contents of 26 different mixtures. Geochemical modeling was used to simulate the chemical and physical reactions that had occurred after the blending; the results of the modeling were then verified using x-ray diffraction and by measuring the radioactivity of the newly formed solids.

“Our analysis suggested that several ions, including sulfate, iron, barium and strontium, as well as between 60 and 100 percent of the radium, had precipitated within the first 10 hours into newly formed solids composed mainly of strontium barite,” Vengosh said. These radioactive solids could be removed from the mixtures and safely disposed of at licensed hazardous waste facilities, he said. The overall salinity of the blended fluids was also reduced, making the treated water suitable for re-use at fracking sites.

“The next step is to test this in the field. While our laboratory tests show that it is technically possible to generate recycled, treated water suitable for hydraulic fracturing, field-scale tests are still necessary to confirm its feasibility under operational conditions,” Vengosh said.

Andrew J. Kondash, a master’s student in Vengosh’s lab at Duke, was the lead author of the new study. Nathaniel R. Warner, a 2013 Ph.D. graduate of Duke now at Dartmouth University, and Ori Lahav of Technion, in Haifa, Israel, who spent his sabbatical leave at Duke last year, were co-authors.

Funding for the study was provided by Duke’s Nicholas School of the Environment, and partly by a National Science Foundation (NSF) Partnerships for International Research and Education grant (NSF-OISE-12-43433).

Check the following link to read/download the Full Study – “Radium and Barium Removal through Blending Hydraulic Fracturing Fluids with Acid Mine Drainage”:
http://pubs.acs.org/doi/abs/10.1021/es403852h

Water and Conflict in Syria