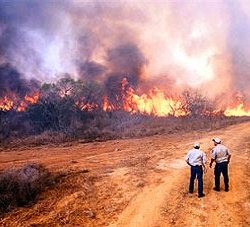 Washington – Wildfires will get worse with climate change, not only endangering those near the blazes, but also threatening the health of millions of Americans from wildfire smoke that can drift hundreds of miles, according to a new report by the Natural Resources Defense Council (NRDC).

As a result, communities must protect themselves from the health risks arising from exposure to wildfire smoke – including asthma attacks, pneumonia, and more serious chronic lung diseases. And the report, titled “Where There’s Fire, There’s Smoke”, suggests the country should take action to curb the threat of climate change.

“There’s trouble in the wind: what blazes in Texas rarely stays in Texas. Wildfire smoke can pose serious health risks to people hundreds of miles away from the sources of fires,” said Kim Knowlton, a senior scientist in NRDC’s Health and Environment Program, who directed the analysis. “Wildfire smoke already clouds the skies of millions of Americans and because climate change will fuel more wildfires, that danger will rise.”

The study, based on smoke data from the 2011 wildfire season, one of the worst in recent decades, found that the area affected by smoke is 50 times greater than the area burned by fire. About two-thirds of Americans – nearly 212 million people – lived in counties affected by smoke conditions in 2011. Many states had large wildfires that year, but the study found that among the top 20 most affected states, six with no major fires nonetheless had to cope with more than a week of medium- to high-density smoke conditions during the year.

The states with the greatest numbers of residents affected by wildfire smoke conditions for a week or longer in 2011, according to the report, were: Texas, Illinois, Florida, Missouri, Georgia, Louisiana, Michigan, Alabama, Oklahoma and Iowa.

Other states where large numbers of people lived in areas with smoky conditions include, ranked in order, are Arkansas, Mississippi, Kansas, Tennessee, Colorado, New Mexico, Nebraska, Indiana, South Carolina and Minnesota. Altogether, more than one-third of the states experienced medium-to-high density smoke conditions for a week or longer, the report shows.

“The clear takeaway is that wildfires, smoke and the conditions that increase fire risk are national health concerns that spread well beyond the borders of local fire perimeters, conditions that are only projected to worsen with climate change,” the report says. NRDC used smoke data from federal weather satellites and also looked at the locations of Environmental Protection Agency ground-based air quality monitoring stations. 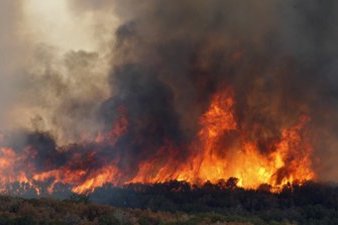 Climate change is fueling droughts that are projected to intensify in the future in across much of the United States as a result of less rainfall and more evaporation, turning wild-land vegetation tinder-dry. It also is projected to fuel more frequent, longer lasting extreme heat and lengthen warm-weather seasons, reducing moisture and setting the stage for fire risks, the report says.

“Until now, when we think about health consequences of fires, we’ve been mainly concerned about the very real and sometimes deadly risks faced by firefighters and others directly impacted by the flames,” said Kinney. “What is new here is the realization that fire smoke can pose health hazards for people living downwind of fires, sometimes very far downwind.”