The polar ice caps of Arctic and Antarctica have been capturing news headlines since September 2012 and especially over the last month – September 2013, for surprisingly differing reasons.

Surprisingly, in September 2013, the Arctic region significantly recovered its lost ice cover – making yet another record for fastest recovery since 1978 (see graph below).

Antarctica, on the other side of the planet, despite warmer air and oceans, has witnessed a steady growth in ice cover which in September 2013 recorded its highest sea ice cover (see picture below) of 19.8 million square kilometers in 35 years! The Antarctica region has been gaining ice steadily over the years and expanding towards the equator – a phenomenon that still lacks a comprehensive explanation. 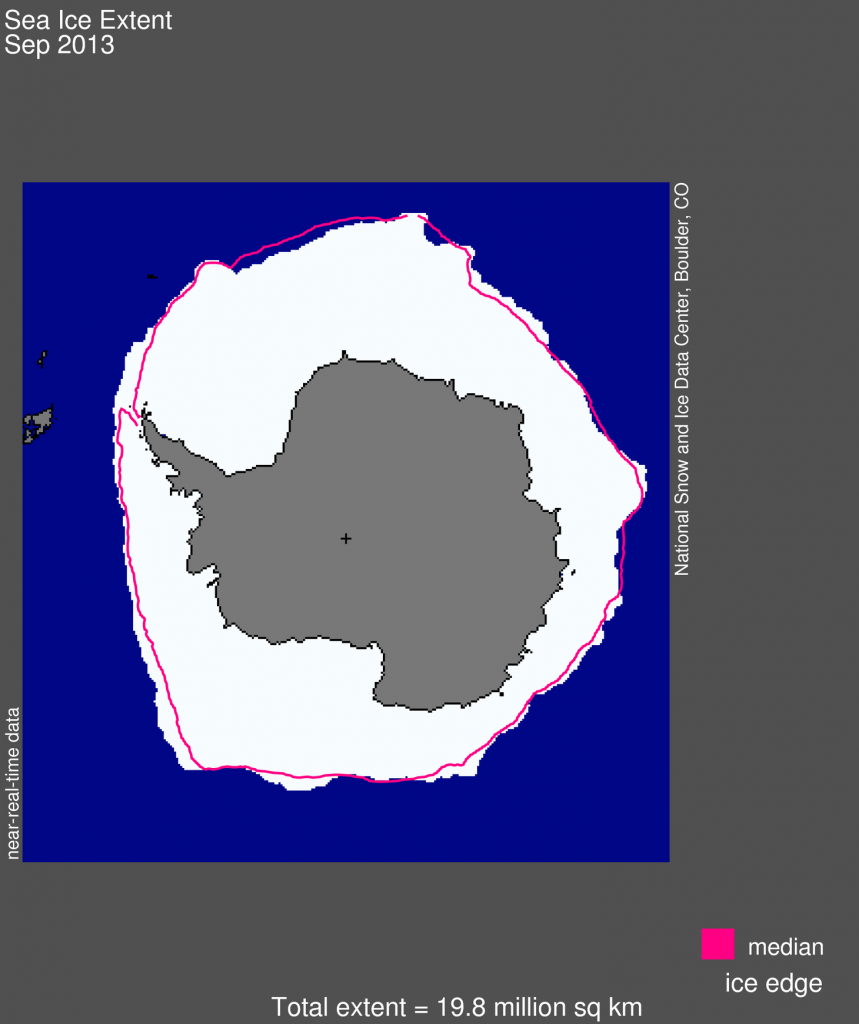 This anomalous behavior is baffling as sea ice is expected to decline in a warming climate.

These steep fluctuations have swung public opinion towards two extremes in less than a year – first towards a view that earth is warming up much faster than what was predicted by scientists, and then, towards a changed view that the earth may perhaps be cooling or maybe the warming is not so fast and real! Both these events cast doubts on the climate models developed by scientists. At the same time, they have given enough fuel to re-ignite the debate that questions the validity of the global warming theory and climate change phenomena.

Are we on the right track?

What is actually happening? We look at a few simple facts based on new scientific evidence and raise few questions.

First, the long held notion of the Arctic region, which is melting twice as fast as the rest of the world,  as a precursor to future climate change impacts may not be scientifically valid. New scientific research questions the idea of analyzing Arctic ice melting as a reference for understanding global warming impacts.

According to scientists at the National Center for Atmospheric Research (NCAR), Arctic ice is influenced by a lot of confounding factors such as the warming currents – North Atlantic/Arctic Oscillation which affect how much heated water is driven into the Arctic. These currents melt ice deep below the Arctic, even during coldest of the winters, and ‘precondition’ the region for a drastic reduction in ice cover during summers. Scientists claim that Arctic melting may be better explained by such factors than by global warming alone, and therefore, cannot be taken as a sensitive indicator of global warming impact due to rising carbon dioxide concentrations.