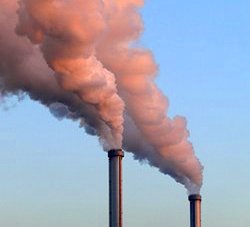 Actual global emissions of carbon dioxide (CO2) reached a new record of 34.5 billion tonnes in 2012. Yet, the increase in global CO2 emissions in that year slowed down to 1.1%, which was less than half the average annual increase of 2.9% over the last decade. This is remarkable, as the global economy grew by 3.5%. This development signals a shift towards less fossil fuel-intensive activities, more use of renewable energy and increased energy saving. Increases in fossil fuel consumption in 2012 were 2.2% for natural gas, 0.9% for oil products, and 0.6% for coal.

The share of the ‘new’ renewable energy sources – solar, wind and biofuel – also increased at an accelerating speed.

These are some of the main findings in the annual report “Trends in Global CO2 Emissions”, released in October by PBL Netherlands Environmental Assessment Agency and the European Commission’s Joint Research Centre (JRC). The report is based on recent results from the Emissions Database for Global Atmospheric Research (EDGAR) and the latest statistics on energy use and various other activities.

An Accelerated Growth in Renewable Energy

Energy carriers in the primary energy supply all showed continuous increases over the past decade, except for nuclear energy, which decreased since 2012 in the aftermath of the Fukushima Daiichi nuclear disaster. Renewable energy has shown an accelerated increase since 2002: the use of hydropower has shown an accelerated growth since 2002 and its output increased by 4.3% from 2011 to 2012. The share of the ‘new’ renewable energy sources – solar, wind energy and biofuels – also increased at an accelerating speed: from 1992 it took 15 years for the share to double from 0.5% to 1.1%, but only 6 more years to do so again, to 2.4% by 2012. 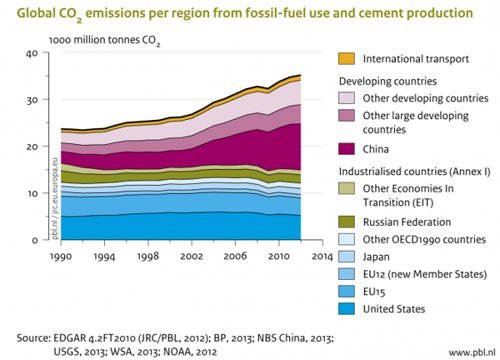 The small increase in emissions of 1.1% in 2012 (including a downward correction of 0.3% for it being a leap year), may be the first sign of a more permanent slowdown in the increase in global CO2 emissions, and ultimately of declining global emissions, if

(a) China achieves its own target for a maximum level of energy consumption by 2015 and its shift to gas with a natural gas share of 10% by 2020;

(b) the United States continues a shift in its energy mix towards more gas and renewable energy; and

(c) in the European Union, Member States agree on restoring the effectiveness of the EU Emissions Trading System to further reduce actual emissions.