Clean technology support can to some extent make up for weak CO2 pricing and hence help keep the two degrees target within reach, a new study shows. Even if the world climate summit in Paris later this year is successful in striking a climate deal, it might not bring about sharp greenhouse-gas cuts in the near-term. However, emission targets could be strengthened by complementary policies, such as support for renewables, a ban on new coal-fired power plants and an initially modest global minimum price on CO2. If such a policy package – each component of which has already been enacted in some countries – were to be put into practice globally now, this could also pave the way for a clean economy with faster long-term CO2 reductions after 2030.

“Economic theory suggests that we’d need a global price on greenhouse-gas emissions to keep warming below the 2 degrees Celsius threshold, and this price would probably have to be more than 30 US dollars per ton of CO2, previous studies showed,” says lead author Christoph Bertram of the Potsdam Institute for Climate Impact Research (PIK). “This seems rather unrealistic, given the track record of policies so far enacted.” This is why the new analysis examines second-best policy mixes. “For the first time, we can show that until 2030 a sub-optimal price for CO2 of only 7 US dollars can initiate a necessary transformation of the energy system if at the same time states enact a range of technology polices.”

Support for renewables, CCS, and a ban on new coal-fired power plants

Technology support schemes could take various forms, from feed-in tariffs to quotas for low-emission electricity sources or tax credits, but also direct support for technological innovation, including the demonstration and upscaling of carbon capture and storage (CCS) technologies. Regulating the most polluting technologies should complement Potsdam,t that. If only renewables are pushed into the market, as currently seen in Germany, the use of natural gas decreases while use of cheap but dirty coal remains unaffected or even expands.

“Successful climate policies not only require reducing emissions in the short term, but also to pave the way for deep decarbonization in the long term,” says project leader Gunnar Luderer of PIK. “To this end, cleverly designed technology policies can bring essential green technologies to the market and avoid further build-up of emissions-intensive infrastructure.” As an example, expanding coal-fired electricity production not only increases current emissions, but due to the long life-time of power plants also hampers future emission-reduction potential. A ban on new coal-fired plants without CCS, as currently implemented in the United States, therefore proves to be a valuable element of a global climate policy mix.

The researchers used a state-of-the art computer model of the global energy economy. Such models have been widely used for the analysis of scenarios with pricing policies of varying stringency. The present study is the first to compare the performance of a variety of alternative policy instruments and to quantify their interaction. For example, technology policies work better with a carbon tax than with a pure cap-and-trade scheme where prices can freely fluctuate and in extreme cases even fall to zero.

“So far, it seems clear that most countries will make heavy use of technology policies in their efforts to limit emissions. It is therefore crucial for them to know how much they could gain by combining these with a predictable CO2 price, even a moderate one,” says co-author Ottmar Edenhofer, chief economist of PIK. “Admittedly, a sub-optimal policy mix as studied here leads to inefficiencies, and hence overall higher costs, but it implies lower distributional impacts and institutional requirements compared with the optimal solution of high carbon pricing. Therefore, in such a scenario the barrier to start action is lowered. And if we want to contain the impacts of climate change, it is essential to start comprehensive and meaningful mitigation policies between 2015 and 2020. Otherwise, both risks and costs increase substantially.” 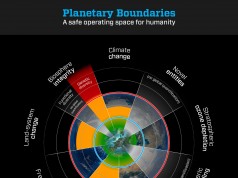 70 Per Cent of Australians Think Climate Change is Occurring