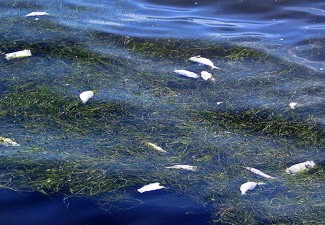 Scientists are expecting a very large “dead zone” in the Gulf of Mexico and a smaller than average hypoxic level in the Chesapeake Bay this year, based on several NOAA-supported forecast models.

NOAA-supported modellers at the University of Michigan, Louisiana State University, and the Louisiana Universities Marine Consortium are forecasting that this year’s Gulf of Mexico hypoxic “dead zone” will be between 7,286 and 8,561 square miles, which could place it among the ten largest recorded. That would range from an area the size of Connecticut, Rhode Island and the District of Columbia combined on the low end to the New Jersey on the upper end. The high estimate would exceed the largest ever reported 8,481 square miles in 2002.

Hypoxic (very low oxygen) and anoxic (no oxygen) zones are caused by excessive nutrient pollution, often from human activities such as agriculture, which results in insufficient oxygen to support most marine life in near-bottom waters. Aspects of weather, including wind speed, wind direction, precipitation and temperature, also impact the size of dead zones.

The Gulf estimate is based on the assumption of no significant tropical storms in the two weeks preceding or during the official measurement survey cruise scheduled from July 25-August 3, 2013. If a storm does occur, the size estimate could drop to a low of 5344 square miles, slightly smaller than the size of Connecticut.

This year’s prediction for the Gulf reflects flood conditions in the Midwest that caused large amounts of nutrients to be transported from the Mississippi watershed to the Gulf. Last year’s dead zone in the Gulf of Mexico was the fourth smallest on record due to drought conditions, covering an area of approximately 2,889 square miles, an area slightly larger than the State of Delaware. The overall average between 1995-2012 is 5,960 square miles, an area about the size of Connecticut.

A second NOAA-funded forecast, for the Chesapeake Bay, calls for a smaller than average dead zone in the nation’s largest estuary. The forecasts from researchers at the University of Maryland Center for Environmental Science  and the University of Michigan has three parts: a prediction for the mid-summer volume of the low-oxygen hypoxic zone, one for the mid-summer oxygen-free anoxic zone, and a third that is an average value for the entire summer season.

This is the seventh year for the Bay outlook which, because of the shallow nature of large areas of the estuary, focuses on water volume or cubic miles, instead of square mileage as used in the Gulf. The history of hypoxia in the Chesapeake Bay since 1985 can be found at the EcoCheck website.

Both forecasts are based on nutrient run-off and river stream data from the U.S. Geological Survey (USGS), with the Chesapeake data funded with a cooperative agreement between USGS and the Maryland Department of Natural Resources. Those numbers are then inserted into models developed by funding from the National Ocean Service’s National Centers for Coastal Ocean Science (NCCOS).

“Monitoring the health and vitality of our nation’s oceans, waterways, and watersheds is critical as we work to preserve and protect coastal ecosystems,” said Kathryn D. Sullivan, Ph.D., acting under secretary of commerce for oceans and atmosphere and acting NOAA administrator. “These ecological forecasts are good examples of the critical environmental intelligence products and tools that help shape a healthier coast, one that is so inextricably linked to the vitality of our communities and our livelihoods.”

The dead zone in the Gulf of Mexico affects nationally important commercial and recreational fisheries, and threatens the region’s economy. The Chesapeake dead zones, which have been highly variable in recent years, threaten a multi-year effort to restore the Bay’s water quality and enhance its production of crabs, oysters, and other important fisheries.

During May 2013, stream flows in the Mississippi and Atchafalaya rivers were above normal resulting in more nutrients flowing into the Gulf. According to USGS estimates, 153,000 metric tons of nutrients flowed down the rivers to the northern Gulf of Mexico in May, an increase of 94,900 metric tons over last year’s 58,100 metric tons, when the region was suffering through drought. The 2013 input is an increase of 16 percent above the average nutrient load estimated over the past 34 years.

For the Chesapeake Bay, USGS estimates 36,600 metric tons of nutrients entered the estuary from the Susquehanna and Potomac rivers between January and May, which is 30 percent below the average loads estimated from1990 to 2013.

“Long-term nutrient monitoring and modelling is key to tracking how nutrient conditions are changing in response to floods and droughts and nutrient management actions,” said Lori Caramanian, deputy assistant secretary of the interior for water and science. “Understanding the sources and transport of nutrients is key to developing effective nutrient management strategies needed to reduce the size of hypoxia zones in the Gulf, Bay and other U.S. waters where hypoxia is an on-going problem.”

“Coastal hypoxia is proliferating around the world,” said Donald Boesch, Ph.D., president of the University of Maryland Center for Environmental Science. “It is important that we have excellent abilities to predict and control the largest dead zones in the United States. The whole world is watching.”