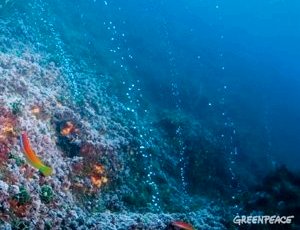 Amsterdam – The extinction of unique deep sea species and other significant irreversible environmental damage to the oceans are a likely result of an emerging trend to exploit seabed minerals, Greenpeace International warned.

A new report from Greenpeace International has found that the potential impact of deep sea mining is not properly understood. Mining could devastate biodiversity hotspots and endanger deep sea organisms as sediment waste and pollution from toxic heavy metals are discharged. This comes as only 3% of the world’s oceans and less than 1% of the high seas are protected, making them among the most environmentally vulnerable places on Earth.

“Deep seabed mining could have serious impacts on the ocean environment and the future livelihoods and well-being of coastal communities,” said Alicia Craw, Greenpeace International oceans campaigner. “We cannot in good conscience stand by and allow that to happen.”

Copper, manganese, cobalt and rare earth metals (1) are found in or on the seabed and a growing number of governments and companies are developing deep seabed mining ventures for mineral exploration. Canada, Japan, South Korea, China and the UK are just some of the countries that have been granted contracts by the International Seabed Authority, which held its 19th session in Jamaica from July 15-26 where more applications were considered.

“We’re on the verge of a dangerous new kind of gold rush in our oceans, which are already suffering from overfishing, climate change and pollution. Governments must fast-track the establishment of a global network of marine reserves that will act as crucial sanctuaries at sea for marine life and protect the ecosystems that we all rely on for our survival,” said Craw.

Greenpeace demands that no seabed mining in coastal zones, on continental shelves or in areas beyond national jurisdiction, takes place unless the impacts from mining are addressed (2) and marine habitats protected.

Greenpeace is also calling for end-user industries to invest in designing products that use seabed minerals more efficiently, while taking responsibility for reusing and recycling initiatives.

Endorsing the Greenpeace International report, Oxford University Conservation Biology Professor Alex Rogers said, “The advent of deep sea mining represents the advent of a new stressor on the oceans. The destruction caused by deep sea fishing on the high seas has demonstrated what uncontrolled use of the global commons can lead to. There is an urgent need to establish a framework for conservation of the deep sea through the establishment of a network of marine protected areas and new international standards for environmental impact assessments that apply to all sectors of industry exploiting ocean resources.”

Greenpeace is asking supporters to help protect the oceans by adding their names to a petition for a global network of 40% marine reserves.

(1) The International Seabed Authority Council has approved 17 exploration contracts to date for the seabed that lies beyond national jurisdiction in the deep seas of the Pacific, Atlantic and Indian oceans, compared with only 8 contracts in 2010. Commercial mining operations may start as early as 2016. There is also significant exploration interest within national waters, particularly in the Pacific Ocean, and one license to mine the deep seabed has already been granted in Papua New Guinean waters, despite significant community opposition.

(2) This should include:
– High Seas Biodiversity Agreement adopted under UNCLOS that provides the global framework for the conservation and sustainable use of marine biodiversity in areas beyond national jurisdiction;
– the establishment of a global network of marine reserves, covering 40% of the world’s oceans, where all extractive activities are prohibited; and
– rules to ensure that the environmental and cumulative impacts of seabed mining, as well as potential impacts on alternative uses and livelihoods, have been thoroughly assessed and properly addressed in advance.

Salamanders Shrinking due to Climate Change