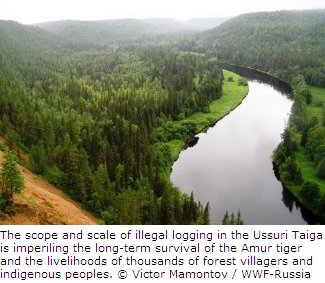 Gland / Moscow – The forests of the Russian Far East are being pushed to the brink of destruction due to pervasive, large-scale illegal logging, largely to supply Chinese furniture and flooring manufacturers, according to a new report by WWF-Russia.

This wide-spread timber theft is threatening the long-term survival of the endangered Amur tiger, while providing a conduit for illegal timber to find its way into the United States, Europe and Japan.

“The scope and scale of illegal logging in the Ussuri Taiga is imperilling the long-term survival of the Amur tiger and the livelihoods of thousands of forest villagers and indigenous peoples,” said WWF-Russia Forest Policy Projects Coordinator Nikolay Shmatkov. “With minimal resources in place to detect and prosecute illegal logging throughout the region, the sheer scale of violations has reached epidemic proportions.”

WWF analysis of Russian customs data revealed that in 2010, the volume of Mongolian oak logged for export was twice the amount legally authorized for harvest from the region – meaning that at least half of the oak shipped across the border to China was stolen. Further analysis of export data showed that 2010 was a mild year: in 2007 and 2008, the oak harvest was four times as large.

The report also finds that, although there are a few positive examples of successful Russian forest law enforcement actions, the proportion of registered illegal logging violations brought to trial is extremely low. In 2011, only 16 percent of the 691 registered cases of illegal logging in Primorsky Province were brought to trial – the lowest figure in the past 10 years.

Illegal logging degrades vital habitat for Amur tigers and their prey. Scientists estimate around 450 Amur tigers remain in the wild. Over harvesting limits the supply of pine nuts and acorns – a main food source for their prey. As timber supplies dwindle, ecologically sensitive forests like wildlife reserves are increasingly threatened.

While WWF is working in Russia to suggest measures the government can take to end illegal logging from the supply side, importing nations must take action as well.

In particular, the report highlights the need for strengthened collaboration between Russia and China to ensure better timber tracking between the two countries.

In addition, the United States, European Union and other countries with timber legality legislation must ensure that those laws are adequately enforced. Companies in importing companies must be sure of the forest origin, legality and traceability of their wood products. 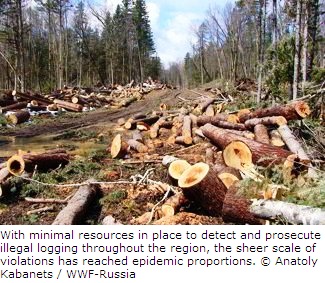 “There is a significant risk that US and EU companies and consumers could be purchasing furniture and flooring made with wood from illegal sources,” said Linda Walker, Forest Program Manager for WWF-US. “It’s critical for companies to ensure that they are sourcing wood products from legal and responsible sources, or they risk violating their customers’ trust and seriously degrading habitat.”

The report urges importers of Chinese or Russian hardwood furniture and flooring to confirm the species and country of wood origin, as Russian species can be mislabelled as originating from other countries. For products made with Russian oak, ash, elm, or linden, companies should exclusively purchase Forest Stewardship Council (FSC)-certified products.

If FSC-certified products are not available, companies should establish rigorous legality and traceability confirmation systems. If neither approach is possible, buyers should avoid any products made from Russian Far East hardwoods due to the high risks of illegality.

Check the following link to read/download the Full Report:
http://www.wwf.ru/resources/publ/book/eng/776