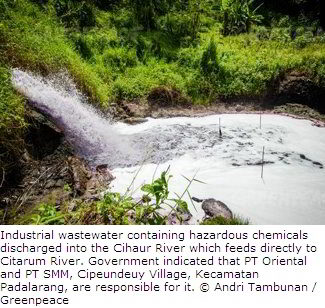 Jakarta, Indonesia – Greenpeace International investigations have revealed the dumping of industrial wastewater containing a cocktail of toxic and hazardous chemicals, and caustic water, directly into the Citarum River, West Java. International fashion brands, including Gap, Banana Republic and Old Navy are linked to this pollution through their direct business relations with PT Gistex Group, the company behind the polluting facility.

“Gap’s latest advertising campaign declares that we should ‘Be Bright’, but by collaborating with toxic suppliers, Gap’s clothes are turning the Citarum into a multi-coloured mess. Gap and other big brands need to work with their suppliers in Indonesia and elsewhere to urgently eliminate all uses of hazardous chemicals from their supply chains and products before it is too late,” said Ashov Birry, Toxic-Free Water Campaigner, Greenpeace Southeast Asia.

The report, “Toxic Threads: Polluting Paradise”, published on April 17 details how the PT Gistex facility has taken advantage of a system that requires little transparency about its activities and where inadequate laws are failing to prevent the release of hazardous chemicals. Other companies linked to the PT Gistex Group include Brook Brothers – which has outfitted 39 of the 44 American Presidents, including Barack Obama – Marubeni Corporation, Adidas Group and H&M.

A wide range of hazardous substances – including nonylphenol and tributyl phosphate – were identified in the water samples taken from the PT Gistex facility’s discharge outfalls. Many of these chemicals are toxic, while some have hormone-disrupting and highly persistent properties. The investigations also revealed wastewater from one of the smaller outfalls to be extremely alkaline or ‘caustic’ (pH 14) indicating that this wastewater had not received even the most basic treatment before discharge.

The textile industry is currently one of the major contributors to industrial toxic water pollution in west Java, with 68% of industrial facilities on the Upper Citarum producing textiles. Greenpeace’s Detox Campaign demands fashion brands commit to zero discharge of all hazardous chemicals by 2020 and work with their suppliers around the world to disclose all releases of hazardous chemicals from their facilities to communities at the site of the water pollution.

Launched in July 2011, the campaign has already convinced 17 international brands including Valentino, Levi’s and Zara to commit to Detox, mobilising over a half a million activists, fashionistas, bloggers and designers united by a belief that beautiful fashion needn’t cost the Earth.

1) Adidas Group, Brook Brothers, Gap Inc., H&M and Marubeni have had a business relationship in the recent past with at least one part of PT Gistex Group, the company associated with the polluting facility (PT Gistex Textile Division) in Indonesia, which Greenpeace sampled in 2012.

Tributyl phosphate (TBP) is a hazardous chemical that is toxic to aquatic life, and moderately persistent.

Antimony: High levels of dissolved antimony were found. Antimony compounds have been associated with dermatitis and irritation of the respiratory tract, as well as interfering with normal function of the immune system.

Wastewater with a pH value of 14 is very caustic, will burn human skin coming into direct contact with the stream, and will have a severe impact (most likely fatal) on aquatic life in the immediate vicinity of the discharge area.

3) Greenpeace International research focused on a large textiles facility in Indonesia, where they found that a wide range of hazardous substances were being discharged directly into the Citarum River by PT Gistex Textile Division, located near Bandung in West Java – where the modern textile industry in Indonesia is concentrated. Wastewater from the textile industry is a major source of pollution, especially in the upper Citarum where 68% of industrial facilities produce textiles, and where the PT Gistex facility is located. This factory undertakes polyester weaving and wet processing such as dyeing, printing, and finishing of polyester.

Greenpeace Actions in Asia & Europe as Dell Fails to Eliminate...