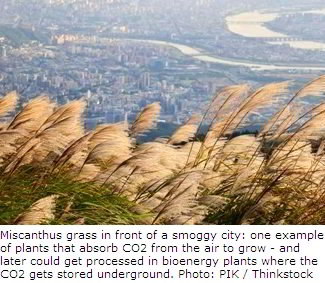 Directly removing CO2 from the air has the potential to alter the costs of climate change mitigation. It could allow prolonging greenhouse gas emissions from sectors like transport that are difficult, thus expensive, to turn away from using fossil fuels. And it may help to constrain the financial burden on future generations, a study published by the Potsdam Institute for Climate Impact Research (PIK) shows.

It focuses on the use of biomass for energy generation, combined with carbon capture and storage (CCS). According to the analysis, carbon dioxide removal could be used under certain requirements to alleviate the most costly components of mitigation, but it would not replace the bulk of actual emissions reductions.

“Carbon dioxide removal from the atmosphere allows to separate emissions control from the time and location of the actual emissions. This flexibility can be important for climate protection,” says lead-author Elmar Kriegler. “You don’t have to prevent emissions in every factory or truck, but could, for instance, plant grasses that suck CO2 out of the air to grow – and later get processed in bioenergy plants where the CO2 gets stored underground.”

In economic terms, this flexibility allows to lower costs by compensating for emissions which would be most costly to eliminate. “This means that a phase-out of global emissions by the end of the century – that we would need to hold the 2 degree line adopted by the international community – does not necessarily require eliminating each and every source of emissions,” says Kriegler. “Decisions whether and how to protect future generations from the risks of climate change have to be made today, but the burden of achieving these targets will increase over time. The costs for future generations can be substantially reduced if carbon dioxide removal technologies become available in the long run.”

Balancing the Financial Burden across Generations

The study published is the first to quantify this. If bioenergy plus CCS is available, aggregate mitigation costs over the 21st century might be halved. In the absence of such a carbon dioxide removal strategy, costs for future generations rise significantly, up to a quadrupling of mitigation costs in the period of 2070 to 2090. The calculation was carried out using a computer simulation of the economic system, energy markets, and climate, covering a range of scenarios.

Options for carbon dioxide removal from the atmosphere include afforestation, and chemical approaches like direct air capture of CO2 from the atmosphere, or reactions of CO2 with minerals to form carbonates. But the use of biomass for energy generation combined with carbon capture and storage is less costly than chemical options, as long as sufficient biomass feedstock is available, the scientists point out.

Serious Concerns about Large-Scale Biomass Use Combined with CCS

“Of course, there are serious concerns about the sustainability of large-scale biomass use for energy,” says co-author Ottmar Edenhofer, chief-economist of PIK. “We, therefore, considered the bioenergy with CCS option only as an example of the role that carbon dioxide removal could play for climate change mitigation.” The exploitation of bioenergy can conflict with land use for food production or ecosystem protection. To account for sustainability concerns, the study restricts the bioenergy production to a medium level, which may be realized mostly on abandoned agricultural land.

Still, global population growth and changing dietary habits, associated with an increased demand for land, as well as improvements of agricultural productivity, associated with a decreased demand for land, are important uncertainties here. Furthermore, CCS technology is not yet available for industrial-scale use and, due to environmental concerns, is controversial in countries like Germany. Yet in this study, it is assumed that it will become available in the near future.

“CO2 removal from the atmosphere could enable human-kind to keep the window of opportunity open for low-stabilization targets despite a likely delay in international cooperation, but only under certain requirements,” says Edenhofer. “The risks of scaling up bioenergy use need to be better understood, and safety concerns about CCS have to be thoroughly investigated. Still, carbon dioxide removal technologies are no science fiction and need to be further explored.” In no way should they be seen as a pretext to neglect emissions reductions now, notes Edenhofer. “By far the biggest share of climate change mitigation has to come from a large effort to reduce greenhouse gas emissions globally.”