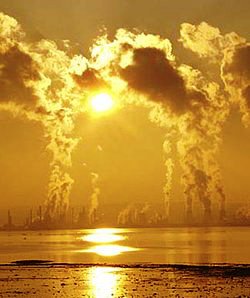 On May 9, 2013, the daily mean concentration of carbon dioxide in the atmosphere of Mauna Loa, Hawaii, surpassed 400 parts per million (ppm) for the first time since measurements began in 1958. This marks an important milestone because Mauna Loa, as the oldest continuous carbon dioxide (CO2) measurement station in the world, is the primary global benchmark site.

Carbon dioxide pumped into the atmosphere by fossil fuels burning and other human activities is the most significant heat-trapping greenhouse gas (GHG) contributing to climate change. Its concentration has increased every year since scientists started making measurements on the slopes of the Mauna Loa volcano more than five decades ago. The rate of increase has accelerated since the measurements started, from about 0.7 ppm per year in the late 1950s to 2.1 ppm per year during the last 10 years.

“That increase is not a surprise to scientists,” said NOAA Senior Scientist Pieter Tans, with the Global Monitoring Division of NOAA’s Earth System Research Laboratory in Boulder, Colorado. “The evidence is conclusive that the strong growth of global CO2 emissions from the burning of coal, oil, and natural gas is driving the acceleration.”

Before the Industrial Revolution in the 19th century, global average CO2 was about 280 ppm. During the last 800,000 years, CO2 fluctuated between about 180 ppm during ice ages and 280 ppm during interglacial warm periods. Today’s rate of increase is more than 100 times faster than the increase that occurred when the last ice age ended.

The Scripps CO2 measurements at Mauna Loa have been supported for many years by the U.S. Department of Energy (DOE), and have more recently been supplemented by Earth Networks, a technology company that is collaborating with Scripps to expand the global GHG monitoring network.

“There’s no stopping CO2 from reaching 400 ppm,” said Ralph Keeling. “That’s now a done deal. But what happens from here on still matters to climate, and it’s still under our control. It mainly comes down to how much we continue to rely on fossil fuels for energy.” 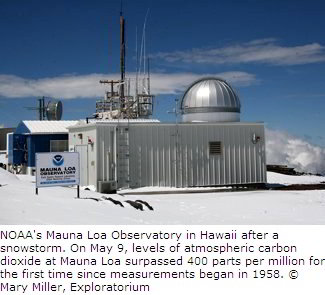 NOAA scientists with the Global Monitoring Division have made round-the-clock measurements there since 1974. Having two programs independently measure the greenhouse gas provides confidence that the measurements are correct.

Moreover, similar increases of CO2 are seen all over the world by many international scientists. NOAA, for example, which runs a global, cooperative air sampling network, reported last year that all Arctic sites in its network reached 400 ppm for the first time. These high values were a prelude to what is now being observed at Mauna Loa, a site in the subtropics, this year. Sites in the Southern Hemisphere will follow during the next few years. The increase in the Northern Hemisphere is always a little ahead of the Southern Hemisphere because most of the emissions driving the CO2 increase take place in the north.

Once emitted, CO2 added to the atmosphere and oceans remains for thousands of years. Thus, climate changes forced by CO2 depend primarily on cumulative emissions, making it progressively more and more difficult to avoid further substantial climate change. 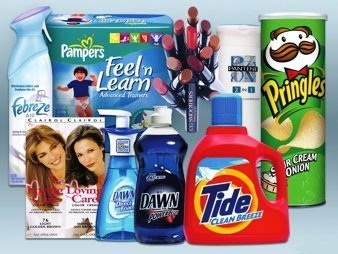