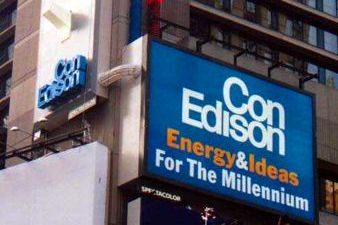 The report features, for the first time, an interactive infographic illustrating the company’s national impact by state. Hovering over individual states reveals what Con Edison spends with local vendors, the numbers of employees or retirees in each area, as well as the company’s offices and alternative energy projects across the country.

“We’re committed to employing, incorporating, and promoting sustainable practices in every part and every aspect of our business,” said Con Edison Vice President of Environment, Health and Safety Andrea Schmitz. “We also are committed to helping customers make the right energy efficiency and sustainability choices.”

Among the report’s other mentions:

In addition to the Newsweek Green Rankings accolade, Con Edison also was named to Corporate Responsibility magazine’s “CR 100” list of the Top 100 companies for 2014.

Check the following link to read/download the Full Report:
http://conedison.com/ehs/2013-sustainability-report/index.html

Report Highlights Growing Role of Fish in Feeding the World