Oakland, California, U.S.A. – It has taken less than eight months for humanity to use up nature’s budget for the year and go into overdraft, with low-income countries most threatened by resource constraints, according to data estimates from Global Footprint Network, an international sustainability thinktank with offices in North America, Europe and Asia.

“Global overshoot is becoming a defining challenge of the 21st century,” said Mathis Wackernagel, President of Global Footprint Network and the co-creator of the Ecological Footprint resource accounting metric. “Each individual country’s availability of and dependence on natural capital will affect its economy and define how it can weather this global storm.”

Global Footprint Network tracks humanity’s demand on the planet (Ecological Footprint) against nature’s biocapacity, i.e., its ability to replenish the planet’s resources and absorb waste, including CO2. Earth Overshoot Day marks the date when humanity’s Footprint in a given year exceeds what Earth can regenerate in that year. Since 2000, overshoot has grown, according to Global Footprint Network’s calculations. Consequently, Earth Overshoot Day has moved from early October in 2000 to August 19th this year.

In 1961, humanity used just about three-quarters of Earth’s available ecological resources for food stuff, fiber, timber, fish stock and greenhouse gas sequestration capacity. Most countries had biocapacity reserves. By the early 1970s, global economic and demographic growth had increased humanity’s Footprint beyond what the planet could renewably produce. We went into ecological overshoot.

Today, 86 percent of the world population lives in countries that demand more from nature than their own ecosystems can renew. According to Global Footprint Network’s calculations, it would take 1.5 Earths to produce the renewable ecological resources necessary to support humanity’s current Footprint. Moderate population, energy and food projections suggest that humanity would require the biocapacity of three planets well before mid-century. This may be physically unfeasible. 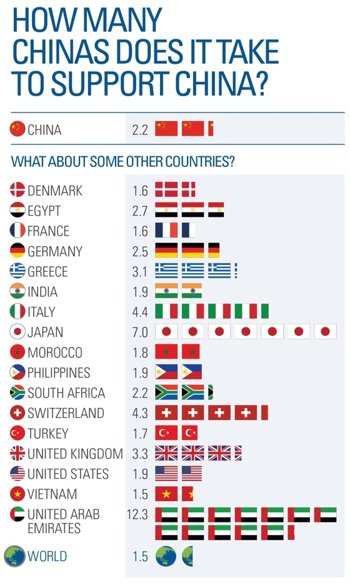 Today’s most vulnerable countries are struggling with both low income (as defined by the World Bank) and biocapacity deficits. They are home to 72 percent of the global population, including two billion people who are not able to meet their most basic needs.

Fifteen percent of the global population lives in countries that run biocapacity deficits, but whose high income has mitigated the most direct resource pressures. These countries include most of the western world.

The remaining 14 percent of the global population lives in countries with more biocapacity than Footprint, including Australia and Brazil. Their main challenge is to treat those natural assets as ever-more significant sources of wealth to be preserved and nurtured over the long term, as opposed to riches to be squandered for short-term profits.

Our mounting ecological debt forces humanity to “pay interest” in the form of deforestation, fresh-water scarcity, soil erosion, biodiversity loss and the build-up of CO2 in our atmosphere, with irrefutable human and economic costs that transcend borders. This ecological overshoot is a shared reality. But the risks are unevenly distributed. Depending on its resource situation, its infrastructure, and its economic possibilities, each country has a unique risk profile. How countries can handle these risks very much depends on how they have positioned themselves.

“Even high-income countries need to realize that a long-term solution requires addressing biocapacity deficit before it turns into a significant economic stress,” said Dr. Wackernagel.

Value of World’s Carbon Markets to Rise Again in 2014