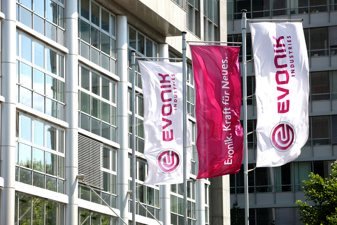 “Our products help our customers around the world reduce their raw material use and energy consumption. We apply the same efficiency thinking to our own processes. After all, we can only be successful in the long term if we use the available natural resources responsibly,” said Evonik’s Chief Human Resources Officer Thomas Wessel. Evonik attained its long-term environmental goals for the period 2004-2014 two years ahead of schedule in 2012.

Evonik’s water intake in 2013 was approximately 293 million m3 (2012: 297 million m3). The company uses the bulk of this water volume to cool its production facilities, relying primarily on environmentally-friendly re-cooling facilities with closed circuit systems. In the reporting year, specific water consumption decreased by five percent as a result of water savings as well as special effects, primarily portfolio restructuring.

The number of occupational accidents remained at a low level in 2013. As in previous years, the accident frequency in continued activities remained significantly below the self-imposed maximum target value of 1.5 with a figure of 0.9. This indicator refers to the number of accidents in the workplace involving Evonik employees and contractors’ employees under Evonik’s direct supervision resulting in absence per 1 million working hours. However, the sustained positive trend in recent years was overshadowed by two fatal accidents at work and one fatal accident on the way to work.

Thomas Wessel emphasized, “Each occupational accident and each substance release is one too many. That is why we launched the ‘Safety at Evonik’ initiative in the year 2013.”

Evonik publishes the report annually to underscore its commitment to ecological, economic, and societal sustainability. As in previous years, the latest Sustainability Report meets the requirements for the successful application of Level A+ of the Global Reporting Initiative (GRI) in compliance with the GRI 3.1 Reporting Guidelines. GRI establishes the internationally recognized standard for comprehensive sustainability reporting and has confirmed the reporting level for Evonik. Large parts of the report underwent an assurance review by an auditing firm.

The Corporate Sustainability Report 2013 is accessible online as of now at www.evonik.com/responsibility.

Evonik, the creative industrial group from Germany, is one of the world leaders in specialty chemicals. Profitable growth and a sustained increase in the value of the company form the heart of Evonik’s corporate strategy. Its activities focus on the key megatrends – health, nutrition, resource efficiency and globalization. Evonik is active in over 100 countries around the world. In fiscal 2013, more than 33,500 employees generated sales of around €12.7 billion and an operating profit (adjusted EBITDA) of about €2.0 billion. For more information, visit http://corporate.evonik.de.