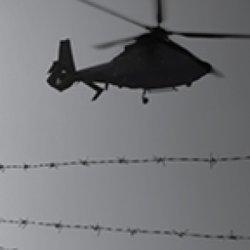 The new report was released in Ohio on May 14. The state-wide rollout featured an event at Columbus Metropolitan Club where retired General Donald Hoffman (USAF) highlighted the new report. Sixteen retired generals and admirals from all service branches contributed to the report, including General Hoffman, which addresses developments in physical science and international relations in the years since the MAB’s groundbreaking 2007 report.

Whereas the initial report described projected climate change as a “threat multiplier”, the new report drills down on the new vulnerabilities created and tensions amplified due to climate change, which it deems “a catalyst for conflict”.

Areas of focus include how observed climate impacts such as prolonged drought and flooding impact stability and create conflict – at the same time that decentralized power structures upend and deepen vulnerabilities in Africa, the Middle East and Asia.

Unlike the 2007 report, this one examines domestic vulnerabilities such as military bases flooding due to rising seas and infrastructure damaged by heat and other climate-driven weather extremes. These and other stressors, the MAB writes, could compromise troop readiness and strain base resilience.

“It is not possible to discuss the future of national and international security without addressing climate change,” commented General Hoffman. “Food shortages, droughts, floods – all directly tied to climate change will be catalysts for conflict.”

As part of the rollout of the report, CNA MAB is touring areas of the country highlighting the results to members of the media, community leaders and the general public.

“It’s paramount that we educate people about the report findings and while we’ve seen some progress building resiliency and planning for climate impacts, it’s time for actionable strategies that mitigate climate change,” said General Hoffman.

Other report highlights include:

Check the following link to read/download the Full Study:
http://www.cna.org/reports/accelerating-risks