Potsdam – An international team of researchers headed by Potsdam scientist Dr. Markus Rex from the Alfred Wegener Institute (AWI) has discovered a previously unknown atmospheric phenomenon over the South Seas. Over the tropical West Pacific, there is a natural, invisible hole extending over several thousand kilometres in a layer that prevents transport of most of the natural and man-made substances into the stratosphere by virtue of its chemical composition. Like in a giant elevator, many chemical compounds emitted at the ground pass thus unfiltered through this so-called “detergent layer” of the atmosphere. Scientists call it the “OH shield”. The newly discovered phenomenon over the South Seas boosts ozone depletion in the Polar Regions and could have a significant influence on the future climate of the Earth – also because of rising air pollution in South East Asia.

At first Dr. Markus Rex suspected a series of flawed measurements. In October 2009, the atmospheric physicist from the Alfred Wegener Institute, Helmholtz Centre for Polar and Marine Research (AWI) was on board the German research vessel “Sonne” to measure trace substances in the atmosphere in the tropical West Pacific. Tried and tested a thousand times over, the ozone probes he sent up into the tropical sky with a research balloon every 400 kilometres reported – nothing. Or to be more accurate: almost nothing. The ozone concentrations in his measurements remained nearly constantly below the detection limit of approx. 10 ppbv* in the entire vertical range from the surface of the Earth to an altitude of around 15 kilometres. Normally ozone concentrations in this part of the atmosphere are three to ten times higher.

Although low values at an altitude of around 15 kilometres were known from earlier measurements in the peripheral area of the tropical West Pacific, the complete absence of ozone at all heights was surprising. However, after a short period of doubt and various tests of the instruments, it dawned on the worldwide recognised ozone specialist that he might be onto a phenomenon yet unknown to science.

A few research years later and after the involvement of other colleagues came confirmation: Markus Rex and his team on board the “Sonne” had tracked down a giant natural hole over the tropical South Seas, situated in a special layer of the lower atmosphere known as the “OH shield”. The research results on the newly discovered OH minimum were published in the journal Atmospheric Chemistry and Physics, with the Institute of Environmental Physics of the University of Bremen and other international research institutions as partners.

“Even though the sky appears to be an extensively uniform space for most people, it is composed of chemically and physically very different layers,” Markus Rex explains the complex make-up of the atmosphere. The air layers near the ground contain hundreds or even thousands of chemical compounds. This is why winter and spring, mountains and sea, city and forests all have a distinct smell. The great majority of these substances are broken down into water-soluble compounds in the lower kilometres of the atmosphere and are subsequently washed out by rain. Since these processes require the presence of a certain chemical substance, the so called hydroxyl (=OH) radical, this part of the atmosphere is called the “OH shield”. It acts like a huge atmospheric washing machine in which OH is the detergent.

Extremely long-lived chemical compounds find their way to the stratosphere, even where the OH shield is intact. These include methane, nitrous oxide (“laughing gas”), halons, methyl bromide and chlorofluorocarbons (CFCs), which are notorious as “ozone killers” because they play a major role in ozone depletion in the Polar Regions.

After many years of research, scientists now understand the complicated process of stratospheric ozone depletion very well. “Nevertheless measured ozone depletion rates were often quite a bit larger than theoretically calculated in our models,” Markus Rex points out a long unsolved problem of atmospheric research. “Through the discovery of the OH hole over the tropical West Pacific, we have now presumably made a contribution to solving this puzzle.”

And at the same time, discovered a phenomenon that raises a number of new questions for climate policy. Researchers are now tackling these questions in a new research project funded by the EU with around 9 million euros, i.e., “StratoClim”, which is coordinated by the Alfred Wegener Institute. Within this project, a new monitoring station will be established in the tropical West Pacific, together with the Institute of Environmental Physics at the University of Bremen.

“We have to realise,” reminds the Potsdam atmospheric physicist, “that chemical compounds which enter the stratosphere always have a global impact.” Thanks to the OH hole that the researchers discovered over the tropical West Pacific, greater amounts of brominated hydrocarbons can reach the stratosphere than in other parts of the world. Although their ascent takes place over the tropical West Pacific, these compounds amplify ozone depletion in the Polar Regions. Since scientists identified this phenomenon and took it into account in the modelling of stratospheric ozone depletion, their models have corresponded excellently with the actually measured data.

However, it is not only brominated hydrocarbons that enter the stratosphere over the tropical West Pacific. “You can imagine this region as a giant elevator to the stratosphere,” states Markus Rex using an apt comparison. Other substances, too, rise here to a yet unknown extent while they are intercepted to a larger extent in the OH shield elsewhere on the globe. One example is sulphur dioxide, which has a significant impact on the climate.

“South East Asia is developing rapidly in economic terms,” Markus Rex explains a problem given little attention to date. “Contrary to most industrial nations, however, little has been invested in filter technology up to now. That is why sulphur dioxide emissions are increasing substantially in this region at present.” 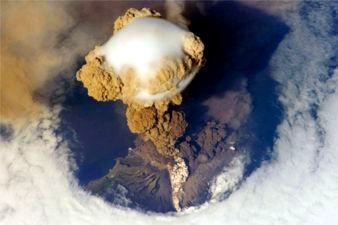