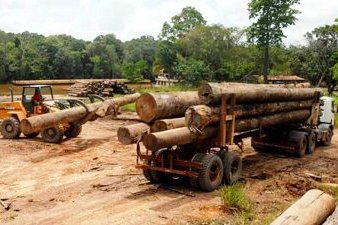 Washington, D.C. – The mega-diverse Peruvian Amazon is a globally important arena when it comes to promoting sustainable logging. Despite efforts to achieve sustainability, including a modern Forestry Law and an important Forestry Annex in the US–Peru Trade Promotion Agreement, illegal logging continues to plague the region.

These instruments reformed the legal logging concession system – which allows the Peruvian Government to grant long-term contracts for logging rights on specific tracts of public land – and the seemingly comprehensive regulatory framework to manage it. There are currently 609 logging concessions in the Peruvian Amazon.

In a new study published on April 17 in the open-access journal Scientific Reports, researchers found that 68% of officially inspected concessions are either cancelled or under investigation for major violations of forestry regulations. Moreover, the nature of the violations indicates that the permits associated with legal concessions are used to harvest and transport trees in unauthorized areas.

“Our new study presents evidence that the legal logging concession system is in reality enabling an illegal logging crisis in the Peruvian Amazon despite important reform efforts,” said Matt Finer of the Amazon Conservation Association. “As a consequence, logging is not contained to concessions, and instead, it threatens all forested lands, including protected areas and indigenous territories.”

The findings derive from analyzing nine years of official information from OSINFOR*, the supervisory body in Peru that conducts post-logging inspections. In the majority of inspected concessions, OSINFOR documented: timber extraction outside of concession limits, extraction or transport of illegal timber, non-compliance with management plans, and submission of false or incomplete information.

Many of the violations pertain to the illegal extraction of threatened cedar species that are listed under the Convention on International Trade in Endangered Species of Wild Fauna and Flora (CITES), which aims to ensure that international trade in species does not threaten their survival.

“Overall, we found a troubling, yet common, pattern indicating that legal logging permits are often used to facilitate the extraction and transit of timber outside the concession area,” said Melissa Blue Sky of the Center for International Environmental Law (CIEL).

Through the analysis of reports of inspected concessions, the study found that logging concession owners often indicate the presence of abundant timber, particularly cedar, in their management plan and then claim authorized logging took place. However, when OSINFOR eventually inspects the concession area, they often find that the information in the management plan was false because there are no stumps of the supposedly harvested trees.

“Despite important reforms, much of the timber coming out of the Peruvian Amazon is still likely sourced outside of authorized concession areas,” said Clinton Jenkins of the Instituto de Pesquisas Ecológicas in Brazil. “More reforms and enforcement of regulations are obviously still needed.”

Another key finding of the study is that OSINFOR’s regulatory work is critically important to improving the concession system. “OSINFOR deserves additional support, not less, as the office is increasingly criticized by loggers whose concessions have been canceled,” said Finer.

Report Highlights Growing Role of Fish in Feeding the World