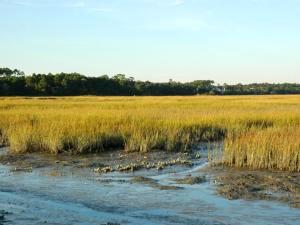 Durham, North Carolina – For years, scientists have believed that preserving more species, no matter which ones, is a key component to enhancing how well an ecosystem performs.

Not so fast, say scientists at Duke University and the University of Massachusetts at Boston.

In a new study of biodiversity loss in a salt marsh, published in December 2013 in the Proceedings of the National Academy of Sciences, they find that it’s not just the total number of species preserved that matters, it’s the number of key species.

If humans want to reap the benefits of the full range of functions that salt marshes and other coastal ecosystems provide, we need to preserve the right mix of species, they said.

“Having a group of distantly related species, representing markedly different ecologies and biology, is as important, or more important, than just having more species in general,” said Brian R. Silliman, Rachel Carson Associate Professor of Marine Conservation Biology at Duke’s Nicholas School of the Environment.

“It’s quality, not just quantity,” said lead author Marc J. S. Hensel, a Ph.D. student at the University of Massachusetts at Boston. “We need to preserve a wide variety of species.”

To better understand how the loss of key species affects these functions, Silliman and Hensel conducted a tightly controlled eight-month field experiment in a salt marsh on Sapelo Island, Georgia. They set up eight different experimental treatments, each with a different mix of three of the marsh’s most abundant “consumer” species: purple marsh crabs; marsh periwinkle snails; and fungus.

At first, all three species were present, to mirror the natural “intact” conditions of the marsh. Silliman and Hensel then began sequentially removing species – first one, then two, then all three – to simulate extinctions.

Throughout the experiment, they measured the effects of each species mix on three important salt marsh functions: overall grass growth (productivity); the rate of dead plant removal (decomposition); and how fast tidal or storm surge water percolated through the marsh (filtration).

The effect of the species removals on individual functions varied considerably, because in salt marshes, each species is very good at performing one or two functions.

However, when all three key species were present, the average rate of all functions – a measure of overall ecosystem health – rose simultaneously.

“Our study provides a rare, real-world example that the loss of key species can have profound impacts on the overall performance of an ecosystem,” Silliman said. “It suggests that the ability of nature to perform well at multiple levels may depend not just on the overall number of species present, but on having many distantly related species, each of which performs a particular task that keeps an ecosystem healthy and allows it to provide the multiple benefits humans value.”

“If we had only been looking at three different species of similarly functioning crabs, or only one marsh function, we would have missed that, and erroneously predicted that only one consumer species is needed to maintain high system performance,” he said.