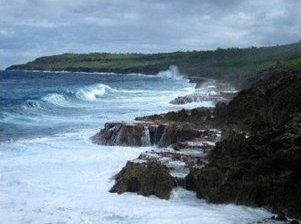 Columbus, Ohio – Coastal portions of the world’s oceans, once believed to be a source of carbon dioxide (CO2) to the atmosphere, are now thought to absorb as much as two-thirds more carbon than they emitted in the pre-industrial age, researchers estimate.

These coastal areas, which now appear to operate as one of the several types of so-called “carbon sinks”, may help moderate global warming by absorbing carbon dioxide, counteracting some of the CO2 released into the atmosphere by human activities. Scientists refer to the extensive shallow waters between land and open oceans as the “coastal ocean”.

That shift of the coastal ocean from carbon source to sink, quantified for the first time in the December 5, 2013, issue of the journal Nature, suggests coastal areas are a key component of the global carbon budget, the scientists say.

“Compared to the open ocean, we know less about the coastal ocean’s carbon cycle even though it’s right in front of us,” said James Bauer, Professor of Evolution, Ecology and Organismal Biology in Ohio State University’s College of Arts and Sciences and lead author of the paper.

“There is an intense need for more research because we don’t currently have the data to know exactly what’s going on everywhere,” he said. “The methods are there now that weren’t available 50 years ago. We just have to commit to increasing the number and types of coastal regions being studied.”

Prior to the industrial age, decomposing plant materials in coastal waters and sediments likely led to the release of carbon dioxide. The Nature paper suggests that microscopic plant growth in coastal areas, fueled by fertilizer runoff, is now leading to greater uptake of CO2. It also suggests that the atmospheric build-up of carbon dioxide caused by the burning of fossil fuels is further contributing to this uptake of CO2 by coastal waters.

New instrumentation allows scientists to generate new best estimates of carbon cycling in coastal areas. Using the latest measures available, Bauer and colleagues created a model estimating that coastal areas released, on average, about 150 million metric tons of carbon per year a century ago. Now, these same waters are estimated to absorb approximately 250 million metric tons of carbon each year.

“Some coastal oceans are still emitting carbon dioxide, so this is a global average and our best estimate of how they’re behaving as a whole around the earth if we add them up based on our current knowledge base,” he said. “To discern a large-scale switch like this on a global scale is fairly unusual.”

Bauer also noted that for the first time, the Intergovernmental Panel on Climate Change (IPCC) is expected to acknowledge the importance of coastal waters to the global carbon cycle in its next report, due out in early 2014. The IPCC’s 2007 report and other analyses of the global carbon cycle have largely neglected to take coastal oceans into account, he said.

“When we’re counting every ton of CO2 that we’re putting into the atmosphere, every additional sink is an important one to identify,” he said.

The capture and release of carbon dioxide is difficult to study in coastal systems because of their diverse and variable nature. Coastal areas also represent an enormous part of the global landscape: the current length of all coastlines could wrap around Earth 41 times.

“The coastline represents a huge linear interface between land and the open ocean, and is very important in the transfer of nutrients and carbon between the two,” said Bauer, also a faculty member in Ohio State’s Environmental Science Graduate Program.

The scientists detailed their best effort to come up with estimates of carbon cycling in three sub-sets of coastal areas: those dominated by river outlets, others consisting of filtering estuaries and bays, and the continental shelf – any coastal water reaching a depth of about 200 meters or fewer. The researchers used what little evidence was available about the pre-industrial age to develop a likely scenario for the coastal ocean at that time.

In broad terms, coastal waters were primarily full of decomposing plant materials 100 years ago, which suggests that the coastal ocean of that era released carbon dioxide to the atmosphere.

With the human activity associated with industrialization, however, came the burning of fossil fuels for manufacturing and transportation, putting more carbon dioxide into the air and creating an increased pressure of this gas on some regions of the earth’s surface – including coastal areas. Following World War II, manufacturers also began producing vast quantities of agricultural fertilizers containing nitrogen and phosphorous – and about 95 percent of these nutrients run off into rivers and are flushed into coastal waters. There, these elements stimulate microscopic plant production, which draws carbon dioxide into the water to aid in plant growth.

“The evidence suggests that human activities in coastal zones will continue to have an important impact on global carbon cycling,” Bauer said. “It’s a tricky area of study, but omitting the coastal ocean from the overall carbon budget leaves a gap in projections for future atmospheric CO2 levels.”

Check the following link to read/download the Full Paper – “The Changing Carbon Cycle of the Coastal Ocean”:
http://www.nature.com/nature/journal/v504/n7478/full/nature12857.html