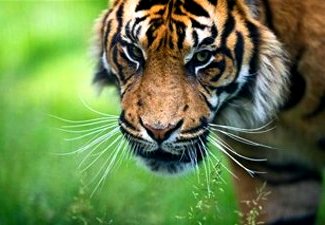 Jakarta – Household brands that source palm oil through Singapore-based palm oil trader Wilmar International, such as the makers of Oreo biscuits, Gillette shaving products and Clearasil, are making consumers unwitting accomplices in the destruction of Indonesia’s forests, and pushing critically endangered species like the Sumatran tiger to the edge of extinction, revealed Greenpeace International on October 22 in fresh investigations.

“As the world’s biggest player in the palm oil sector, Wilmar has the power to transform the industry. But until Wilmar commits to a no-deforestation policy, their trade of palm oil to big household brands such as P&G, Mondelez and Reckitt Benckiser make consumers unwitting accomplices in the extinction of Indonesia’s 400 remaining Sumatran tigers,” said Bustar Maitar, Head of the Indonesian Forest Campaign for Greenpeace International.

The palm oil sector is the largest driver of deforestation in Indonesia and the vast majority of the forest cleared in identified oil palm concessions in Sumatra during 2009-2011 was tiger habitat. The plantation sector is the chief threat to Sumatran tigers, with up to 1 million hectares of prime tiger habitat already allocated to concessions.

Greenpeace has evidence of trade by Wilmar from companies whose operations include illegal clearance, fires on peatland and extensive clearance of tiger habitat. The report also documents illegal oil palm plantations within Tesso Nilo National Park, harvests from which have previously been tracked to Wilmar’s own mills and that continue to feed into Indonesia’s palm oil supply chain. Palm oil plantations are driving the destruction of Tesso Nilo National Park, of which only a quarter now remains, according to Greenpeace’s mapping analysis.

Although Wilmar has undertaken to preserve high conservation value (HCV) forests and peatland on its own concessions, these areas supply less than 4% of the palm oil it trades and refines, with the remainder being produced by third-party suppliers. Wilmar has no proper systems in place to ensure traceability in their supply chains.

Greenpeace demands that Wilmar stops laundering dirty palm oil onto global markets and that household brands clean up their supply chains. On 20 October 2013, Greenpeace Southeast Asia unfurled a banner challenging the trader to choose forest protection over forest destruction, within a Wilmar concession in Jambi with documented clearance of tiger habitat counter to RSPO rules.

“Greenpeace has a history of exposing illegality and gross environmental abuse linked to corporations – from Russian oil giants in the Arctic, for which 30 of our peaceful activists are currently in jail, to reformed forest destroyers like APP in Indonesia. The challenge is on for Wilmar and its customers to clean up their act. Greenpeace will continue to stand with the millions of people in the region who have suffered enough from forest destruction,” said Bustar, in reference to the forest fire crisis earlier this year.

“Commitments like those made by members of the Palm Oil Innovation Group, or by Nestle, prove that an end to forest destruction is possible. Palm oil is a critical part of the Indonesian economy. Wilmar must use its position as a so-called leader to make a genuine contribution to Indonesia’s development, rather than destroying the future for its people, its wildlife and the global climate on which we all depend,” said Yuyun Indradi, Greenpeace Southeast Asia Forest Campaigner.

Check the following link to read/download the Full Report – “License to Kill: How Deforestation for Palm Oil is Driving Sumatran Tigers toward Extinction”:
http://www.greenpeace.org/international/en/publications/Licence-to-kill/