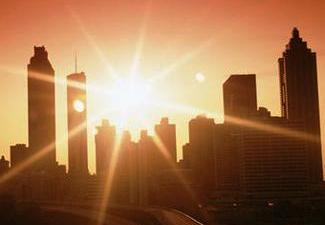 Extremes, such as the severe heatwave last year in the U.S. or the one in 2010 in Russia, are likely to be seen much more often in the near future. A few decades ago, they were practically absent. Today, due to man-made climate change, monthly heat extremes in summer are already observed on 5 percent of the land area. This is projected to double by 2020 and quadruple by 2040, according to a study by scientists of the Potsdam Institute for Climate Impact Research (PIK) and the Universidad Complutense de Madrid (UCM). A further increase of heat extremes in the second half of our century could be stopped if global greenhouse gas emissions would be reduced substantially.

“In many regions, the coldest summer months by the end of the century will be hotter than the hottest experienced today – that’s what our calculations show for a scenario of unabated climate change,” says Dim Coumou of PIK. “We would enter a new climatic regime.”

The scientists focus on heatwaves that exceed the usual natural variability of summer month temperatures in a given region by a large margin, namely so called 3-sigma events. These are periods of several weeks that are three standard deviations warmer than the normal local climate – often resulting in harvest losses, forest fires, and additional deaths in heat-struck cities.

While climate change mitigation could prevent this, the projected increase up to mid-century is expected to happen regardless of the emissions scenario. “There’re already so much greenhouse gases in the atmosphere today that the near-term increase of heat extremes seems to be almost inevitable,” Coumou says. This is important information for developing adaptation measures in the affected sectors.

As the study defines a heat extreme based on the natural variability a region has experienced in the past, the absolute temperatures of this type of event will differ in different regions of the world. For instance, the observed Russian heatwave brought an increase of the monthly average temperature by 7 degrees Celsius in Moscow and daily peak temperatures above 40 degrees. In tropical regions, e.g. like Southern India or Brazil, natural variability is much smaller than in the moderate zones, hence 3-sigma events are not as large a deviation in absolute temperatures.

“In the Tropics, Even Relatively Small Changes can have a Big Impact”

“In general, society and ecosystems have adapted to extremes experienced in the past and much less so to extremes outside the historic range,” Alexander Robinson of UCM says. “So in the tropics, even relatively small changes can yield a big impact – and our data indicates that these changes, predicted by earlier research, in fact are already happening.”

The scientists combined results of a comprehensive set of state-of-the-art climate models, the CMIP5 ensemble, thereby reducing the uncertainty associated with each individual model. “We show that these simulations capture the observed rise in heat extremes over the past 50 years very well.” Robinson points out. “This makes us confident that they’re able to robustly indicate what is to be expected in future.”

Companies Disclose Ecological Footprint of 82 Million Tonnes of Pulp and...