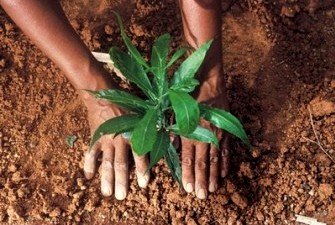 New Delhi – India can make green growth a reality by putting in place strategies to reduce environmental degradation at the minimal cost of 0.02% to 0.04% of average annual GDP growth rate. According to a new World Bank report released on July 17, this will allow India to maintain a high pace of economic growth without jeopardizing future environmental sustainability.

According to the assessment done by the authors of the report, the annual cost of environmental degradation in India amounts to about Rs. 3.75 trillion ($ 80 billion) equivalent to 5.7% of GDP. It focuses on particle pollution (PM10) from the burning of fossil fuels, which has serious health consequences amounting to upto 3% of India’s GDP along with losses due to lack of access to clean water supply, sanitation and hygiene, and natural resources depletion.

Of this, the impacts of outdoor air pollution account for the highest share at 1.7% followed by cost of indoor air pollution at 1.3%. The higher costs for outdoor/indoor air pollution are primarily driven by an elevated exposure of the young and productive urban population to particulate matter pollution that results in a substantial cardiopulmonary and Chronic Obstructive Pulmonary Disease mortality load among adults. Further, a significant portion of diseases caused by poor water supply, sanitation and hygiene is borne by children under 5. About 23% of child mortality in the country could be attributed to environmental degradation, the report says.

“Like in many other countries, the debate over growth versus environment is also active in India. This report suggests there are low-cost options that could significantly bring down environmental damage without compromising long-term growth objectives,” said Onno Ruhl, World Bank Country Director in India. “The costs of doing this are not only affordable in the long-term but would also be offset by the significant health and productivity benefits.”

“Grow now and clean up later will not be environmentally sustainable for India in the long run,” said Muthukumara S. Mani, a Senior Environmental Economist at the World Bank and the lead author of the report. “We believe that a low-emission, resource-efficient greening of the economy is possible at a very low cost in terms of GDP growth.”

There are significant health benefits under both scenarios. The savings from reduced health damages range from $ 105 billion in the 30% case to $ 24 billion with a 10% reduction. This, to a large extent, compensates for the projected GDP loss.

The report also emphasizes that green growth is measurable and important as India is a hotspot of unique biodiversity and ecosystems. The study undertook a first-ever comprehensive assessment of value of ecosystem services from various biomes across India.

“Conventional measures of growth do not adequately capture the environmental costs, which have been found to be particularly severe at the current rapid growth rates. There are also tools available now to estimate the significant contribution of natural capital in the form of ecosystem services. Therefore, it is imperative to calculate green Gross Domestic Product (green GDP) as an index of economic growth with the environmental costs and services factored in,” Mani added.

Check the following link to read/download the Full Report:
http://documents.worldbank.org/curated/en/docsearch?query=P101805