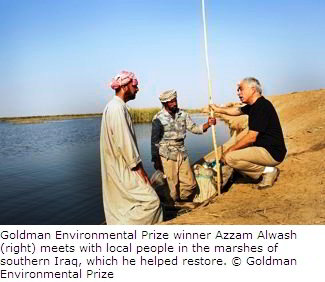 Nairobi – An environmental activist from Iraq has picked up a major international award for his efforts to restore the country’s Mesopotamian Marshlands; an ecosystem of global importance considered by some to be the original biblical ‘Garden of Eden’, and the focus of a key United Nations Environment Programme (UNEP) initiative from 2003 to 2006.

Mr. Azzam Alwash was awarded the 2013 Goldman Environmental Prize for his longstanding commitment to supporting the recovery of the marshlands, which suffered major damage in the late 20th century due to the construction of dams on upstream river systems, and a massive drainage operation by the former Iraqi regime.

In 2001, the United Nations Environment Programme (UNEP) alerted the international community to the destruction of the marshlands when it released satellite images showing that 90 percent of the ecosystem had been lost.

The UNEP study identified ecological damage to the wetlands, with the accompanying displacement of much of the indigenous Marsh Arab community as one of Iraq’s major environmental and humanitarian emergencies.

A civil engineer by training, Azzam Alwash returned to Iraq from the USA in 2003 and was shocked to witness the extent of the damage to the abundant marshlands he remembered from his youth.

He built on his professional experience in hydraulic engineering to survey the region and to develop a plan to restore the critical ecosystem. After founding the non-profit organization Nature Iraq in 2004, Alwash worked with Iraq’s environment and water resource ministries to promote the environmental, social and economic benefits of restoring the marshlands.

He continues to raise awareness among the national government and civil society for the need to support Iraq’s environment and key habitats.

“The Mesopotamian marshes are starting to flourish again as a result of Azzam Alwash’s advocacy,” reads a profile on the Goldman Environmental Prize website. “Almost half of the original area is now flooded again. In what is perhaps the most telling evidence of his success, the restored marshes are slated to be established as the country’s first national park in the spring of 2013.”

UNEP subsequently launched a major initiative – sponsored by the Government of Japan – to support the sustainable development and restoration of the Iraqi Marshlands through the use of environmentally sound technologies. 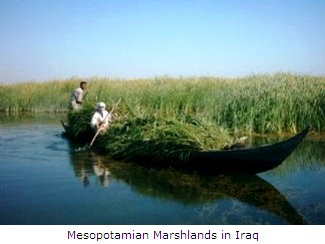 UNEP designed and coordinated the implementation of the Iraqi Marshlands Observation System to monitor the re-flooding and re-establishment of wetland vegetation in a systematic and scientific manner. The initiative also saw the provision of safe drinking water and sanitation systems to up to 22,000 people in six pilot communities.

“Efforts by activists such as Azzam Alwash, together with ongoing work by the United Nations, the Iraqi government, and international partners, are playing a vital role in restoring the resilience of the marshlands which were seriously weakened over the past 30 years,” said Hassan Partow, Senior Environmental Expert at UNEP’s Post-Conflict and Disaster Management Branch.

“To tackle future challenges, such as climate change and the unregulated construction of dams, renewed commitment for a regional watershed-based solution is essential to restore this critical ecosystem to its former glory, and ensure that local communities benefit from healthy, productive wetlands,” he added.