The International Finance Corporation (IFC) and Deutsche Bank are financing Vietnamese rubber companies driving a wave of land and forest “grabs” in Cambodia and Laos, according to a new report and film by Global Witness.

The report, “Rubber Barons”, reveals how a pervasive culture of secrecy around plantation investments in the region has allowed two of Vietnam’s largest companies, Hoang Anh Gia Lai (HAGL) and the state-owned Vietnam Rubber Group (VRG), to acquire more than 200,000 hectares of land through a series of deals with the Lao and Cambodian governments that lack transparency.

It details how these rubber giants, with close links to the region’s notoriously corrupt political elites, operate with complete impunity, devastating local livelihoods and the environment in the process. Deutsche Bank has significant holdings in both companies, while the IFC invests in HAGL. 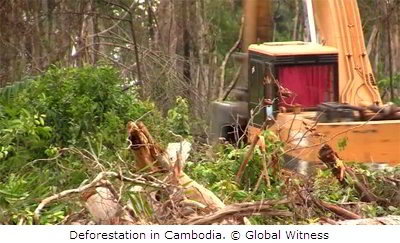 “We’ve known for some time that corrupt politicians in Cambodia and Laos are orchestrating the land grabbing crisis that is doing so much damage in the region. This report completes the picture by exposing the pivotal role of Vietnam’s rubber barons and their financiers, Deutsche Bank and the IFC,” said Megan MacInnes, Head of the Land Team at Global Witness. “Both companies are having severe impacts on the human rights of ordinary Lao and Cambodian citizens. Often, the first time people learn of a plantation is when the company bulldozers arrive to clear their farms.”

Cambodia and Laos are undergoing a land grabbing crisis that has seen more than 3.7 million hectares of land handed over to companies since 2000, forty percent of which is for rubber plantations. The report reveals how HAGL and VRG‘s operations are characterised by a lack of consultation with communities, non-payment of compensation, and routine use of armed security forces to guard plantations. Large areas of supposedly protected intact forest have been cleared, contrary to forest protection laws, apparently in collusion with Cambodia’s corrupt elite. Global Witness is calling for HAGL and VRG to be prosecuted for their illegal activities and for their plantation concessions to be cancelled.

‘Rubber Barons’ identifies various relationships between Deutsche Bank and the IFC – the private lending arm of the World Bank Group – and the rubber companies. These investments stand in stark contrast to both institutions’ public commitments on ethics and sustainability, as well as the World Bank’s core mandate to end global poverty:

HAGL and VRG’s ultimate ownership of these companies lies behind an intricate web of shell companies. This allows them to disguise the fact that they have massively exceeded Cambodia’s legal limit on land holdings.

Since August 2012, Global Witness has made persistent requests to HAGL and VRG to bring their operations in line with local law, resolve disputes with affected communities and publicly disclose details of their concessions. Neither company has so far acknowledged any wrongdoing, or made any commitment to change their behaviour.

Local people’s testimony, detailed in ‘Rubber Barons’, describes the impact of these activities on their communities – increased food and water shortages, loss of livelihood without compensation and poor employment conditions are commonplace, while indigenous minorities have lost burial grounds and sacred forests to the bulldozers. Those who protest face violence, intimidation and even arrest, often by state authorities who are meant to protect them but instead protect the Vietnamese companies.

“These cases are shocking, but they are far from unique,” said MacInnes. “Until governments bring in and enforce regulations to end the culture of secrecy and impunity that is driving the global land grabbing crisis, international banks and financial institutions will continue to turn a blind eye to the human rights abuses and deforestation they are bankrolling.”

When asked, HAGL confirmed holding rubber plantations totalling 46,752 hectares in Cambodia and Laos but denied knowledge of any disputes with local communities or involvement in illegal activities. VRG meanwhile stated the evidence presented to them was not true, but declined to confirm the status or holdings of its rubber operations in either country.

The report and film accompanying it are available at:
www.globalwitness.org/rubberbarons